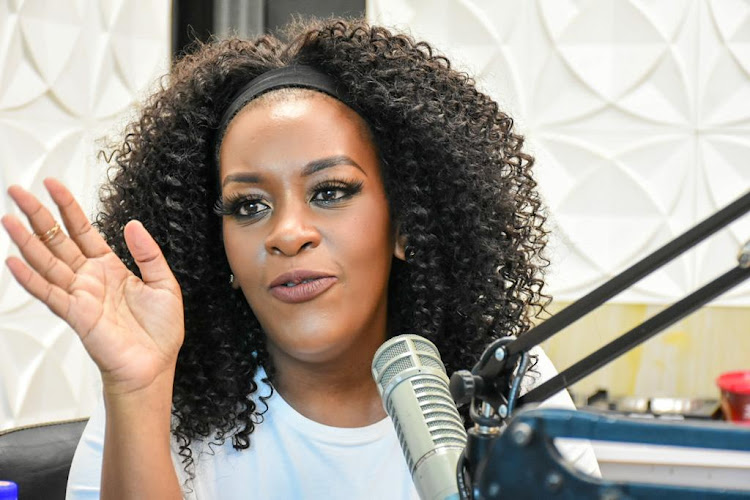 Lifestyle content creator Murugi Munyi received a pr package from Rich Beauty, which if you don’t know is owned by Huddah Monroe.

The TMI podcaster while unboxing the package remarked that the box was taking her down memory lane, pointing out that it had major success card vibes.

“I don’t know why this packaging is giving success card,” Murugi said as she continued too pen the package.The packaging stated that it’s a nine-step system (with nine products) that helps reduce the appearance of age spots, fine lines, and other signs of aging. It also supports brighter and healthier-looking skin.

In her review of the products on her Instagram stories, Murugi kinda threw shade at Rich Beauty saying that despite the packaging claiming that it’s a nine-step system, it was actually a six-step system (six products) since, three of the products in the box were duplicated.

The duplicated products were the toner, essence milk, and moisturizing cream, which were packaged in smaller quantities.

She continued to highlight that despite there  products, they all had the same tagline,at the top which read ‘for flawless and richer skin’ and at the bottom ‘layers of penetration.Moisturizing skin’

“One thing that feels like a red flag, which I don't know it's a red flag or the nature of the manufacturing, is that all the products are written the same thing, at the top its indicated for flawless and richer skin and the bottom layers of penetration. Moisturizing skin," she pinpointed.

Regardless of the diversity of the products, the goal was similar, not like what you would get with other brands.

“It doesn’t give the ingredients list or specific descriptions of what the product should do she added.

The Pr package she received also contained a vagina tightening wand, whose benefit, as stated, is that; it eliminates odors and tightens the Vagina in 30 seconds.

However, with the chain of red flags from the beauty package, that Murugi had encountered, she made it clear that she was not about to give it a thought.

“They also sent me this Vagina tightening wand, and you already know I'm not putting this anywhere near my vagina,"she said dropping the mic.

Sharing her experience with Massawe Japanni, Munyi explained, "After my third child my weight went to 120, I knew I had to do something.
Entertainment
11 months ago
WATCH: For the latest videos on entertainment stories