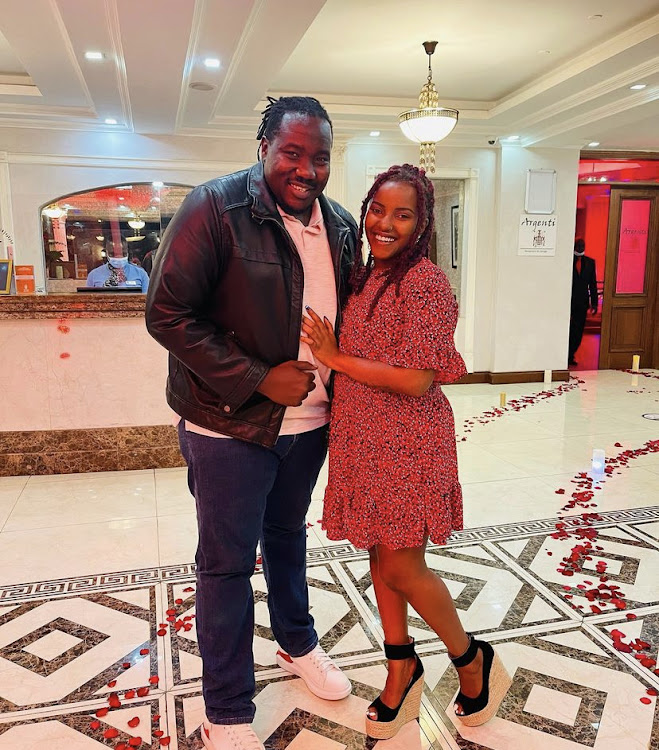 As the Raburu's celebrated their son's first birthday, media personality Willis Raburu had an extra surprise in his pocket for his baby mama.

In front of their family and friends, Willis went on one knee and asked his long-term girlfriend Ivy Namu to marry him. To which a teary and excited Ivy said yes.

Ivy who is currently expectant with their second child, posted a cute photo of her and her fiance warmly hugging as she showed off her engagement ring perched on her second finger with perfectly manicured nails.

She captioned the picture, " A thousand times yes, in this lifetime & the next #issawife #peaceandlight #engaged"

The proposal was not the only surprise the big man Bazzu had up his sleeves, turns out Willis is quite the romantic.

The musician got a fellow creatives in the game, the vocally talented Nviiri and Bensoul to  serenade his love during this special day.

Nviiri made an appearance singing his romantic hit, "Mae Wendi" as Bensoul carried a huge bouquet of red roses which he presented ton Ivy.

Honestly, they are lucky their baby boy, Mali was turning just one and had no concept of what was really going on. Because if you all had decided to hijack my birthday I would have thrown a major tantrum.

During his proposal, Willis had some really sweet words to share with Ivy, on his knee he told his now fiancee, ''You are my love, you are my everything... and it will give me great pleasure if you Ivy would be my wife....''

And an ecstatic Ivy was too stunned to speak as she wiped tears off her eyes.

Funny guy Willis prompted her saying, " we need an answer by the way..." to which she did not waste time saying yes. She replied "of course" as she extended her finger to her man to slip the ring on. As the attendees cheered on and congratulated the two.

Willis and Ivy met back in November, 2019 when Ivy made an appearance in Willi's show and he interviewed her. Ivy then went ahead land a job and headed on working on the same station as her now fiancee.

Wishing the two happiness on their new journey.

Willis Raburu's wife gushes over him on birthday

The couple is blessed with a child
Entertainment
9 months ago

Nviiri the Storyteller’s Niko Sawa (feat. Bien) tops the list as most streamed song in Kenya, capping off what has been a great year for the Sol ...
Entertainment
8 months ago
WATCH: For the latest videos on entertainment stories