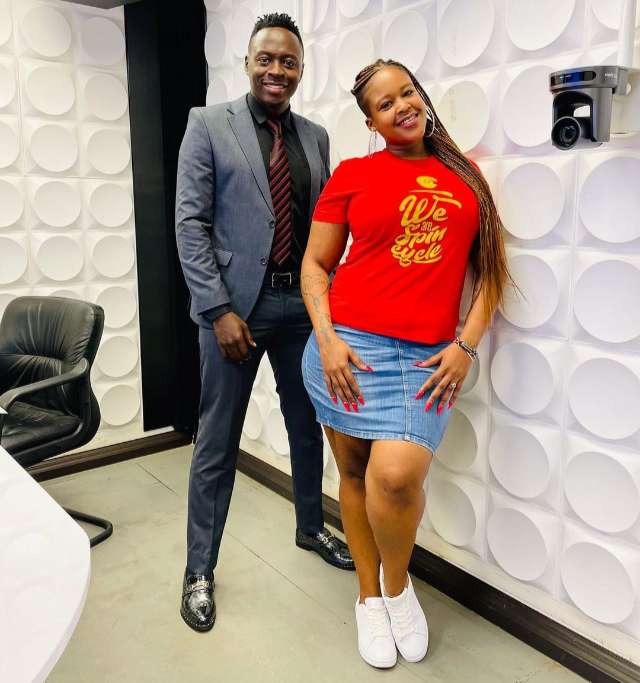 Kamene and Obinna have joined the numerous Kenyans eagerly anticipating the arrival of the self-proclaimed general, Miguna Miguna.

Obinna wanted to know if she was going to the airport to welcome him,

Kamene was so thrilled as she gave the details that the question was a missed shot.

"Heh! Si sasa he was given his passport, and he was like baas, am coming!"

Expounding it further, she stated that Miguna had to change his flight due to public demand.

Mimicking what Kenyans on Twitter said, "We want to come and receive you in the airport, the troops are ready to receive the general," Obinna brought in the hype to match her excitement as he ululated

" KOT was like, you need to land mchana so that we can receive you, as our general," she added.

Laughing it off Kamene carried on, "Miguna claps back, and he is like skiza, I am not the one who is in charge of flight schedules so there is nothing I can do about it. Guys were like but you are Miguna."

As the net has it, the dates were changed, and as Kamene said the troops are ready.

After much online puffing, he later tweeted,

“See you at the JKIA, Patriots,” Miguna Miguna confirmed.

In the comment section, the welcoming team was doing a roll call as they wrote

Benmwesh Nelly: will be there, karibu nyumbani.

Jeremy:We shall travel from Uganda to welcome you Gen

Pharmacists are Rx rated: See you at the Mashujaa day celebrations.

Kiptoo Lance: Welcome back Generali. Will be eagerly waiting for you at the airport on the said date and time.

The hustler: Thank you generally for listening to the patriots. The road from JKIA towards the city center will have to be cleared from traffic for your grand entry. Welcome back. Viva.

Kamene's worst break-up made her think of death

Morning Kiss anchor Kamene Goro has admitted that following her first breakup, she believed she would die.
Shows
1 week ago

Kamene: I had a neighbour who peed in the lift

A neighbor is supposed to be a friend or someone who has your back, but for some, they deserve an arrest warrant.
Shows
2 weeks ago
WATCH: For the latest videos on entertainment stories