The mzungu adores handing out water to Eliud and cheers every time Kipchoge picks up the water. 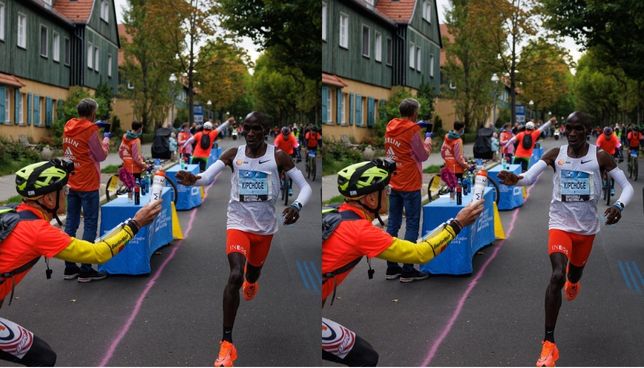 Whenever he is competing in a race, athlete Eliud Kipchoge exclusively takes water from one man.

The man follows Kipchoge throughout the entire marathon, and you can see him holding out a bottle for Eliud to take and slake his thirst.

Henning-Schulke, often known as "Bottle Claus," is a mzungu.

Experts advise that the person handling the bottle touches it at the bottom before the athlete swiftly snatches it at the top to avoid fumbling.

After the 2018 INEOS challenge, Kipchoge paid homage to Claus saying,

"My biggest remembrance of Berlin is the guy who was handing me water. Still my hero upto now."

The water guy got a surprise call from Eliud's management to meet the athlete.

"I rode my bike to the hotel and there he was with his starting number. And something written on it. 'Dear Claus without you I would not have managed to run this world record.'

Well maybe that was a little bit over the edge but I found it very touching and his coach also came and said, you have been so enthusiastic many thanks to you for helping us."

Claus once again was there for Eliud this past weekend, and delightfully handed water to his favorite marathoner.

Kenny Kaburu on Twitter shared a video of Claus handling the water bottle and his joy caught the internet's attention.

Check out reactions below from people who watched the video;

@Philosopher254·I just learnt something new. I assumed that water bottles are given freely to anybody who wants by events organizers. I thought athletes just pick when they want from anybody. So, you arrange yours?

@GICHUKI_254·This team work is so amazing... Anyone noticed kipchoge's name on the bottle man hand

Grace mentioned that their three children Lynn, Griffin, and Gordon are stirred to see their father conquer odds.
Entertainment
4 months ago

Mambo Mbotela sworn in as member of National Heroes Council

Others who have previously served in the docket include global prize winner teacher, Peter Tabichi and the G.O.A.T Eliud Kipchoge.
Entertainment
4 months ago