The Lorry driver was later accosted by 3 highway thugs in a Toyota probox at Kamandura, along the busy Nakuru-Nairobi highway. 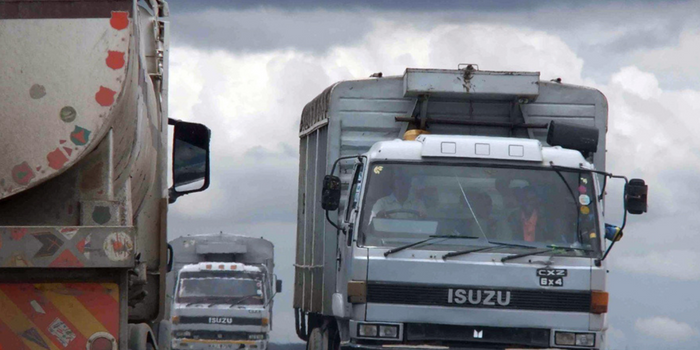 The Directorate of Criminal Investigations (DCI) has launched a manhunt for two thugs who escaped with ‘perforated hindquarters’ (gunshot injuries).

In a statement issued via their official Twitter handle, DCI details that a lorry driver identified as Remson Mwaura was attacked by three thugs while driving from the potato-rich highlands of Molo towards Kajiado.

The Lorry driver was later accosted by 3 highway thugs in a Toyota probox at Kamandura, along the busy Nakuru-Nairobi highway.

“The vehicle being driven dangerously from one end of the road to the other blocked the lorry suddenly, forcing the driver, to stop,”

However, Mwaura did not give up on his lorry without putting up a spirited fight.

“The machete-wielding trio then menacingly beckoned the driver of the lorry to surrender. Confronted with the choice of swerving on the other side of the road and driving off or delivering himself into the arms of the robbers, the driver chose the latter.

“But not without a fight. Mwaura jumped from the cabin flying with both kicks trained on two of the miscreants sending them sprawling on the tarmac like terrified rats,”

Mwaura then took flight towards Rubis petrol station, situated 100 metres from the scene of the incident.

“The thugs attempted a comeback by stabbing him on his right leg close to the loins. All Mwaura remembered hearing them say as he sprinted for dear life was ‘Kari Kiguruki!’ (have we encountered a madman?) At the petrol station, he met a guard who assisted him in contacting detectives based at DCI Tigoni,”.

Moments later, the detectives intercepted the lorry at Murengeti and flagged it down. But the thugs failed to stop and disembarked from the moving lorry leaving it to land in a ditch.

The detectives opened fire at the trio, arresting one culprit while the other two managed to escape with gunshot injuries.

“…managed to arrest one of them identified as Alexander Mwaniki, 30. The rest escaped the onslaught into darkness, but with severely perforated hindquarters.

The arrested suspect is currently in custody and being processed for arraignment to answer to charges of robbery with violence.

Meanwhile, the lorry was towed to Tigoni police station as its driver sought medication at Tigoni hospital.

President William Ruto has announced that the two top police bosses are no longer working in their respective positions.
Entertainment
4 months ago