The NYS officer has been identified as Dickson Loyerer. 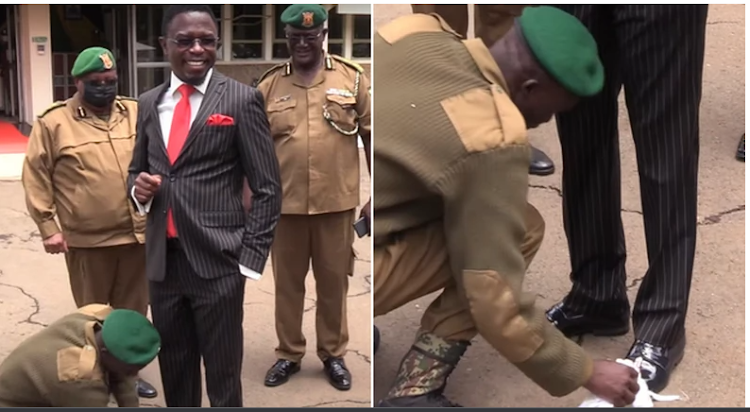 A viral video of Sports CS Ababu Namwamba getting his shoes cleand by an NYS officer has sparked mixed reactions among Kenyans.

The video was captured during the handover ceremony that was held at NYS on Monday, November 7, 2022.

A uniformed National Youth Service officer could be seen cleaning CS Namwamba’s shoes. The NYS officer has been identified as  Dickson Loyerer.

The CS showed satisfaction with the uniformed officer's excellent show-shining abilities by placing his hands in his pockets while the NYS officer was squatting on the ground.

However, the NYS DG said that service was part of the discipline instilled during training and therefore the CS should not give a tip."No! No! We do not allow a tip.

It is part of their discipline," she said.

CS Namwamba was at the NYS headquarters in Nairobi, where he officially received the NYS docket, which was transferred from the Ministry of Public Service to the Ministry of Sports.

silvah_mistarish A rare forage of me shortly after receiving salary

sheikhamercy_realdiva He was offered. He was too shy to accept it I was a longer clip. But they insisted and said that is how they do it.

odhiambobayat Hii serikali itakuwa ya A son of nobody ......sons of nobody 😂😂😂😂

king_troker "Discipline" sure reminds me of slavery though 🙂

its_ledama I am pretty sure he wasn't forced... It was part of discipline.

On Thursday, Ababu Namwamba joined his peers at State house for the swearing-in ceremony of the new CS's appointed by President William Ruto.
Entertainment
1 month ago

New Cabinet Secretaries were sworn in on Thursday at a ceremony held at State House Nairobi, which was attended by President William Ruto.
Entertainment
1 month ago