The Tanzanian plane had 43 people on board. 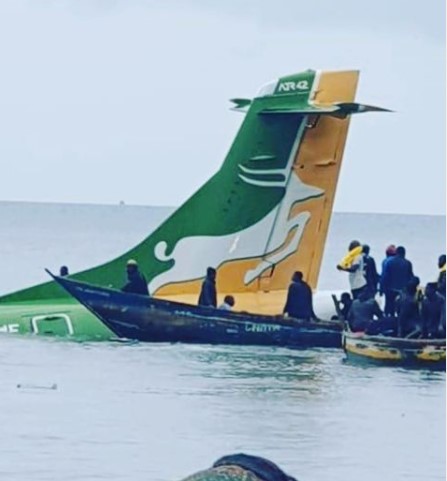 Precision Air that crashed into Lake Victoria on Sunday morning

On November 6, 2022, the world woke up to sad news, after Precision Air crashed into Lake Victoria killing 19 people.

The Tanzanian plane had 43 people on board.

Fiona Ndila Mutuku was among those affected as her husband Peter Omondi was the co-pilot in the ill-fated plane. The couple had a 6-year-old son named Leon.

On the day the plane crashed Fiona had spoken to her husband and had also spoken the night before as she knew he was to fly to Bukoba the next day (Sunday).

“Safe skies!” she told him at the end of their call, her way of telling him to fly safely. She had said this to Peter hundreds of times before.

Fiona would only learn about the plane crash at 10:45 a.m yet the accident had occurred at 8:53 am.

Heart beating fast, she checked again to confirm where the flight was headed. When she saw that it was Bukoba, her heart sank.

Then she started making calls frantically. First Peter’s older brother Alex Odhiambo and his sister Gertrude Achieng. Sadly none of them knew anything.

The pilot's death was broken to the family after 8 hours. Fiona had earlier received a call from an HR Officer from Precision Air but the call did not give details about her husband.

Still, for Fiona, there were clues of the bad news — like how one of his friends, a pilot too, had put Peter’s photo as his profile picture on WhatsApp. The other clue was something she knew about her husband of nine years.

“Looking back, I think I knew the moment I heard his plane had gone down in the lake. I saw videos of the partially submerged plane. Peter didn’t know how to swim...,” she trails off during the interview at the couple’s home in Ngong.

Immediately the plane crashed, it was almost completely submerged. Only the tail fin was visible.

Fiona has shared that her husband had planned on taking swimming lessons as he didn't know how to swim.

“Oh! He died a painful death,” Fiona says, breaking down.

Peter was scheduled to come home on November 23, to attend his son’s graduation from preschool the next day.

Peter Omondi who would have turned 45 next month has been described as a go-getter and the life of the party.

May he rest in perfect peace.

Media personality, Cynthia Nyamai has disclosed that she has lost a good friend in yesterday's Precision Air crash.
Entertainment
1 month ago

Tanzanian singer Ben Pol, who is the brand ambassador of the company changed his profile picture to black
Trending
1 month ago