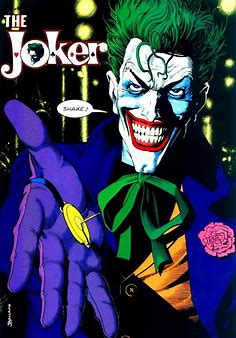 DC fans across the globe are furious with the powerhouse after it unveiled a new comic where the Clown Prince of Darkness himself, Joker apparently gets pregnant and gives birth to his own son.

Netizens are calling out DC comics for apparently trying a little hard to push a narrative down their throats as well as capitalizing on LGBTQ+ representation.

In the new comic, the cartoonist and the writer spin up a tale about Joker wanting an heir, but one that was of his DNA. So, he decides to pursue the female super wizardress Zatanna.

But the powerful Zatanna wants absolutely nothing to do with the Joker. She gets the bright idea to cast a spell on him (after beating him to a pulp) that guarantees no one else will ever bare his offspring, but it backfires making it so Joker gets pregnant and gives birth all by himself.

The writer had the bright idea to have the evil genius give birth via vomiting as readers eventually find out.

Along the way, the comic strip depicts him with a huge belly and getting checked on gynecologically.

The storyline appeared as a backup feature in the fourth book in the series, “The Joker: The Man Who Stopped Laughing.”

In the end,  Joker gives birth to a mud monster who transforms into a mutated child-version of himself who he adopts as his son as they're both enamoured with one another.

That's about all there is to the entry, and yet it's caused a lot of feathers to be ruffled in conservative circles per usual.

“This is one of those comics you can’t really review, because there’s no real story or artistic vision to pick apart,” said Comic review critic Theresa Campagna.

“Writing aside, however, there have been a lot of these little moments or stories at DC lately that make me go, ‘How the heck did DC editorial give that a green light?’ Finished off Campagna.

Famous TikToker and makeup artist, Jony hairdesigner, has called out size 8 for allegedly choosing not to be styled by him.
Trending
1 month ago