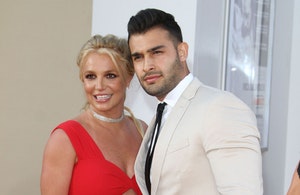 Britney Spears and her husband Sam Asghari at a past event
Image: Commons Wikimedia

Just when everything seemed to be going well for pop icon Britney Spears and she was settling into a state of normalcy rumours surfaced that the artist had had a manic episode.

Rumour mills were going around that Britney had suffered a manic episode" in a restaurant over the weekend as had been described by paparazzi and onlookers nearby.

It was also said that Sam was seen angrily walking out of her following the drama.

Well, her husband Sam Asghari has come out to defend her making it crystal clear that Britney did not have a manic episode nor did he run out on her.

Speaking to the paparazzi Sam explained in detail the events that transpired during their Sunday night date in Woodland Hills.

According to Sam, his wife was incredibly frustrated and that is why she was acting the way she did.

In a trending video, Britney was seen covering up her face, and talking gibberish, after somebody tried recording her while she was dining.

Sam greatly attributed this to the paparazzi as well as the public getting a little camera-happy when they see Britney in public and can't help themselves in attempting to film her. Something he says is unfortunate as it overwhelms her, but he also acknowledges it as coming with the territory for the type of fame that his woman has.

On why he "bolted out" on her as an eyewitness in the vicinity claimed Sam clarified this by saying, "all I did was briefly leave the hotel to go get the car because we needed to get out of there."

All while maintaining that things didn't go down the way they were initially reported by mainstream media.

Britney herself also appeared to deny any sort of manic behaviour.

The following day, the star took to her Instagram stories to post a video of herself and questioned the story altogether.

She was seen flipping the middle finger a couple of times in the video so we clearly know how she feels about the whole thing.

Britney Spears chose not to invite her mom, dad and sister to her wedding with Sam Asghari
Entertainment
7 months ago

Evaluating Britney Spears and her legacy

She has been hailed as an inspiration by everyone from Lady Gaga, who in 2009 described her as "the most provocative performer of my time"
Entertainment
4 weeks ago