The fans were wearing the club's red jersey and carrying a symbolic trophy. 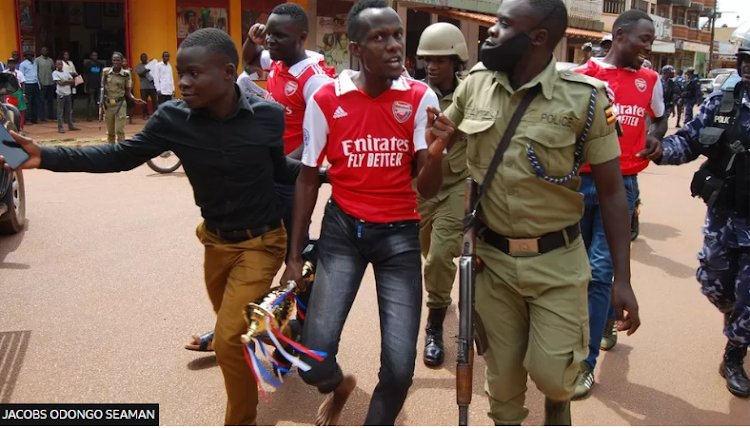 At least eight Arsenal fans have been arrested in the Ugandan city of Jinja after celebrating the club's win against Manchester United in the English Premier League.

The fans were wearing the club's red jersey and carrying a symbolic trophy.

Police said they didn't have a permit to hold the procession which is a public order offence.

Arsenal scored a dramatic last-minute goal to win 3-2 in Sunday's match against a fierce rival.

The result gave the Gunners a five-point cushion at the top of the table, giving hope to fans around the world that the club could end its 19-year wait to win the English Premier League

The Arsenal fans were travelling in a convoy of five vehicles on Monday morning when they were intercepted by police. One of them was carrying a trophy they had bought at a local store.

"I don't know what we have done but we were simply celebrating our victory over rivals Manchester United," Arsenal fan Baker Kasule is quoted as saying by the local Daily Monitor news site.

James Mubi, the regional police boss and a self-declared Arsenal fan, told the BBC he had not reviewed the fans' charges but wondered why they were celebrating when only half of the matches in the season had been played.

"What would happen if an altercation with rival fans broke out? They did not inform police to provide security for their procession," Mr Mubi said, dismissing the suggestion that the arrest was linked to the frequent arrest of members of an opposition party who also wear red.

Rights groups say the Public Order Management Act has given police discretionary powers that have been used to stifle citizens' rights.

Agather Atuhaire, a lawyer and rights activist, told the BBC that Uganda's police continue "to be high-handed even after the Constitutional Court nullified all the draconian provisions that gave them unfettered powers to restrict the constitutionally guaranteed freedom of association and assembly".

Arsenal and Manchester United enjoy huge support in Uganda, and across Africa, and when they play makeshift video halls in Uganda are always packed to the rafters.

Deputy President Rigathi Gachagua has weighed in on the drama revolving around Mugiithi singer Samidoh and his two women – Karen Nyamu and wife Edday ...
Entertainment
2 weeks ago

Kenyan forex trader Sammy Boy has been got in another big lie after alleging that he was the only Kenyan who was invited to Beyoncé's private concert ...
Entertainment
2 weeks ago