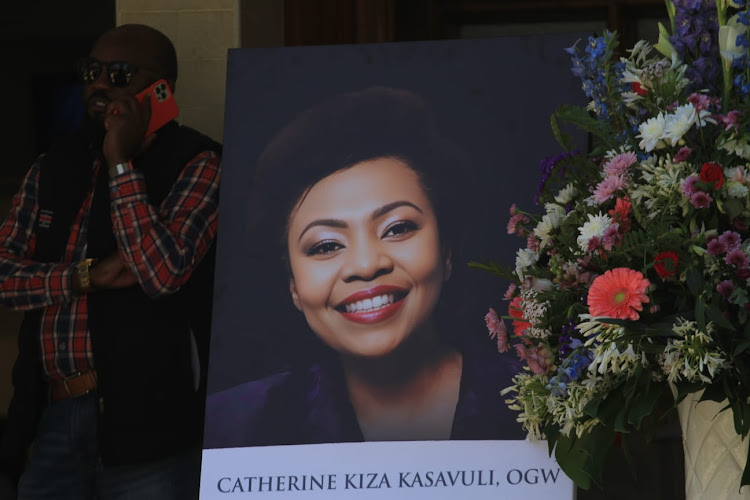 Journalists from different media houses were among those who paid tributes to the late veteran news anchor Catherine Kasavuli during her funeral at Zululu viilage in Vihiga county on Saturday.

Machoka said his first encounter with Kasavuli was in 1981 when she joined the Voice of Kenya as a young girl with good English.

"I asked if she could do business reporting, she feared. I told her her diction and English is good. I persuaded her to do her first TV commercial about Cerelac," Machoka said.

An emotional Machoka said he was afraid of taking photos with her when he visited Kasavuli in hospital at KNH.

He said was afraid that he would use the photos to remember her deceased colleague.

"We sat, we prayed, laughed, went down memory lane. I didn't know it would be the last time," he said.

Mdoe on his part eulogized 'Kasav' as a friendly, motherly colleague who always advised colleagues.

"She cried, because KTN promised to buy her a new car so she was wondering whether to take a new car or a new job. Wachira and I told her if KTN wanted they would buy her a car while in that position," he said.

Afune, who represented RMS owner S.K Macharia and other directors eulogised Kasavuli as a hard worker.

He sent condolences from the media station where Kasavuli served for many years.

"We will miss 'Kasav', we launched Vuuka FM, which is number one station in this region, she was resourceful, " he said.

Kasavuli's burial ceremony was held at Nyangori High school after which she will be laid to rest at her Zululu Home in Tigoi.

Catherine Kasavuli will be buried on Saturday evening at Zululu village, Vihiga county.
Entertainment
2 weeks ago