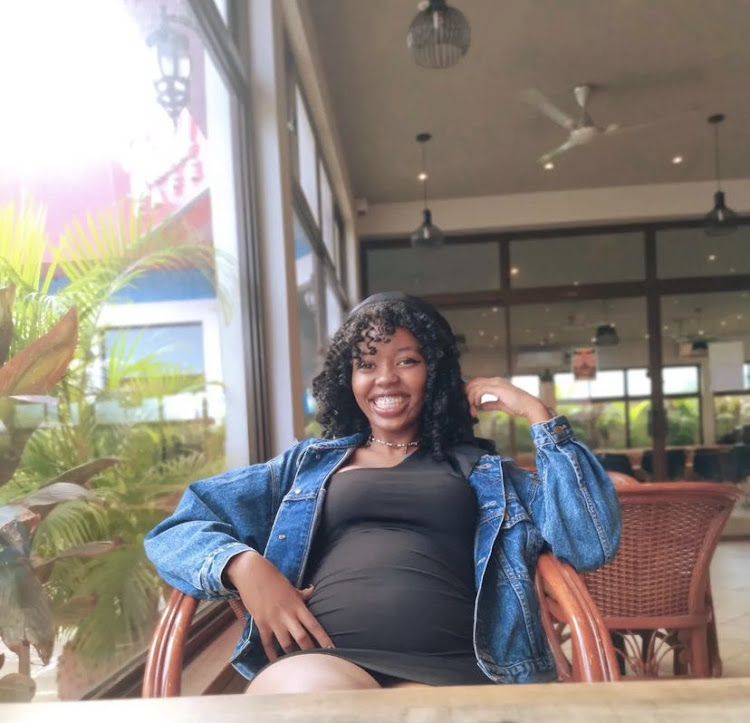 Bensoul's baby mama Tiffany Wanjiru just announced the gender of their little unborn bundle and guys it's a girl!

The 22-year-old shared the news excitedly days after her graduation ceremony from the Technical University of Mombasa.

Tiffany had earlier on stated that she was planning on waiting till she gave birth to find out the gender of the baby but it seems she gave in to her curiosity.

Sharing the news with netizens online Tiffany highlighted that her relationship with her baby daddy Sol generation signee Bensoul was still shaky and she did not wish to discuss it in-depth.

We reached out to Tiffany for a quote and she maintained that the two led their lives separately.

She said, " Ben and I just co-exist, he has his own life and I have mine." Before adding, " I don't even know if he knows we're having a girl but at least I texted him."

Tiffany also highlighted that she did not have a name picked out yet because she had been so certain that she was going to be having a baby boy.

According to her she had had boy names picked out all along.

She also pointed out that she wanted to have a natural delivery as opposed to having CS as she wished to be active after having the baby. Although she was still incredibly scared of the process.

During our interview an excited Tiffany pointed out, " I'm due in August but I'm really hoping my baby is born on my birthday which is in the first week of September. It is a stretch but it might happen."

Interesting while pointing out the strong support system she has she noted that some of her exes had actually been with her through the journey.

Responding to a curious fan who wanted to know if she would let Bensoul's current girlfriend Noni Gathoni see her little girl once she was born Tiffany responded by saying, " if I'm being totally honest, no,"

The young mom speaking to us also pointed out that she will be continuing with her studies, now pursuing a degree come next year.

'Thank you for making me a mum,' Bensoul's baby mama says

Tiffany has confirmed that she is 3 months pregnant for Bensoul.
Entertainment
10 months ago

Tiffany said she was not getting financial support from either Ben nor her immediate family
Entertainment
7 months ago
WATCH: For the latest videos on entertainment stories