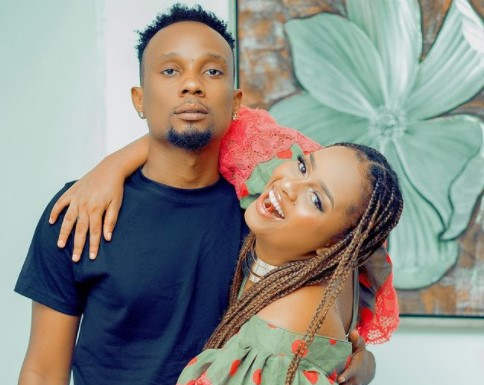 Singer Nandy and her fiance Billnass

Businessman and rapper Billnass has gifted his house manager a brand new iPhone Pro max that was released to the market last week.

The phone gift was delivered to the househelp by Billnass’s wife Nandy who said the gadget is aimed at their making their communication easy.

Nandy went on to instruct the housegirl that the phone will also be used to take photos of their newborn baby on a need basis.

“Here is a gift for you (a phone) from your in-law (Billnas), it’s an iPhone 14 pro max. It’s brand new and still in its box. He told me to hand it over to you and the main aim is he wants to make video calls to see his child whenever he is outside. When he says you send him photos, you d that on time. Are we together? I will show you how to use it and now you can do away with the phone you had,” Nandy said.

A thankful Nandy also went on to reveal that her hubby had also bought her an iPhone 14 Pro max.

"My God keeps fighting for you, my husband. She (Housegirl) is very happy. And as you can see you will be able to see your child very clear. The other phone had officially been abandoned.

“Let me also prepare to unbox my iPhone pro max. I love you my hub Billnass. My, you continue being successful,” Nandy remarked.

Billnass is a businessman who has specialized in selling phones in Tanzania.

The two love birds officiated their relationship on July 16 at the KKKT Church in Mbezi Beach Dar es salaam and in August they welcomed their first child together.

The daughter is already a brand ambassador for an insurance company.

Tanzanian rapper Billnass has shared little known details about his wedding with Nandy and how it almost backfired.
Lifestyle
1 week ago