The Frenchman is only the second player who is not Messi or Cristiano Ronaldo to win the prestigious prize since 2008. 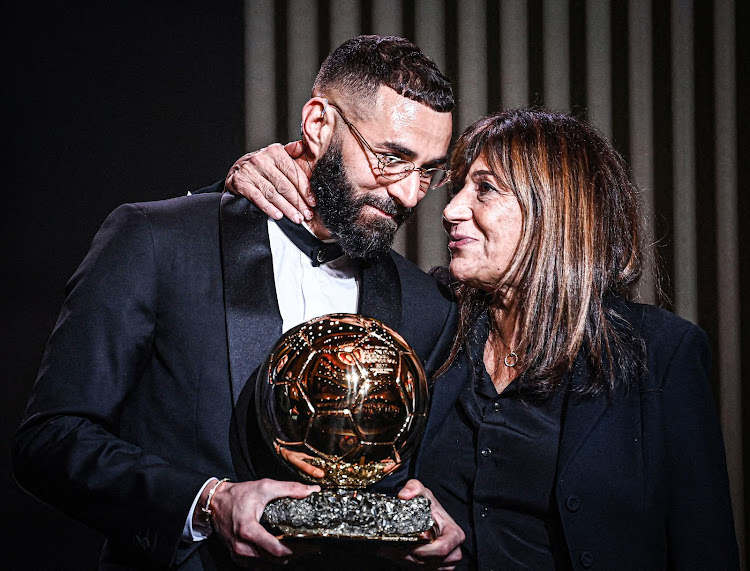 Karim Benzema sharing a moment with his mum after winning the award
Image: Instagram

Karim Benzema won his first ever Ballon d'Or award on Monday after beating a boatload of stars including Kylian Mbappe and Cristiano Ronaldo to the prize.

The Ballon d'Or award is a coveted, iconic trophy that has become synonymous with the greatest players the game has ever seen.

The decade characterized by the back-and-forth struggle for the trophy between Cristiano Ronaldo and Lionel Messi has only served to grow the awareness and attention surrounding it,adding to its glitz.

However, this year Benzema upset the usual tag of war between the two G.O.A.Ts with his win after being nominated for the award nine times before.

This means that French-man is only the second player who is not Messi or Cristiano Ronaldo to win the prestigious prize since 2008.

The 34-year-old scored key goals as he helped Real Madrid win both the Spanish league title and the Champions League last season.

The Real Madrid striker scored a total 44 goals in 46 appearances during the 2021-2022 season, including finishing with 15 goals in the Champions League – the competition’s top scorer – as well as reestablishing himself in France’s international side.

After winning the award, and with boyhood hero Zinedine Zidane next to him, he told the cheering audience: "This prize in front of me makes me really proud."

He went on to say:

"When I was small I never gave up. It was a childhood dream. I had two role models in my life,  Zidane and Ronaldo as well. I always had this dream in my mind that everything is possible."

"There was a difficult period where I wasn't in the French team but I never stopped working hard. I never gave up. I always kept in my head this job of playing football," the striker said.

After his speech, the star invited his mum and son on stage to share the moment with him.

Benzema has also begun this season well, with five goals in his first 10 appearances, as well as a goal in this Sunday’s El Clasico victory against archrival Barcelona.

These are some of high profile athletes that have, at any point in their careers, battled a disease
Trending
3 months ago

Basketball Hall of Famer Dikembe Mutombo has been diagnosed with brain tumour and is currently receiving treatment
Trending
3 months ago
WATCH: For the latest videos on entertainment stories