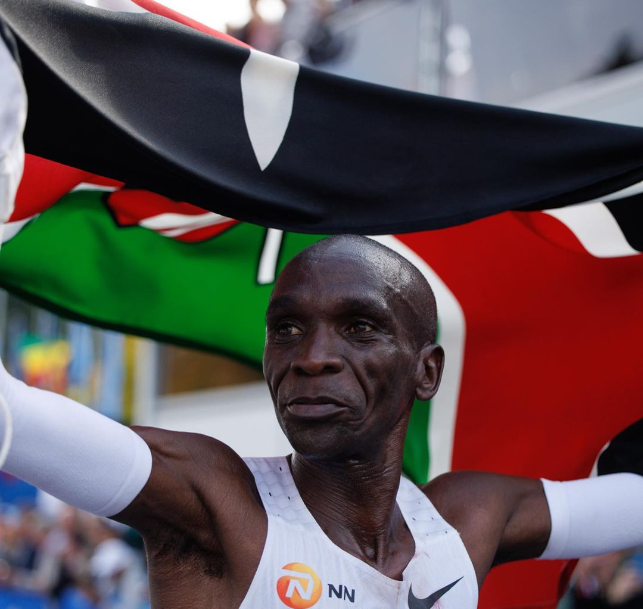 Internationally celebrated Kenyan athlete, Eliud Kipchoge in a recent interview with NTV revealed that one of his heart's biggest desires was to run with former United States president, Barack Obama.

In the candid interview, Kipchoge talked about his amazing running career and achievements (including being considered the greatest of all-time marathon runners), as well as his dreams and goals.

" I believe Obama is a real inspiration to all leaders both inside and outside our country," started the Berlin marathon world record holder.

He then went on to talk about his wish of being on the track with the 44th president of America, adding that he gets the best and fresh ideas/ inspiration when he is running.

Adding that he feels on the track Barack and him would be able to bounce off ideas on each other.

"I need to run with him... share with him, you know when you are running that is when ideas start coming and I would like to share ideas with him while actually on the run.

Then put it on paper and life will continue," Kipchoge said.

Last week while he was in London for the London Marathon the athlete spoke of the former president yet again noting that he would invite Obama to the country for a run.

He really seems intent on making this dream of his come true.

Kipchoge heaped praises on Barack describing him as a character of hope, inspiration, and unity that goes beyond all human nature despite race and ethnicity.

The athlete revealed his vision of having a friendly run with Obama stemmed from when the former president sent him a congratulatory message via Twitter following Kipchoge beating the two-hour mark in Vienna and completing the INEOS challenge. A first in world history.

Today in Chicago, Brigid Kosgei set a new women's world record. Staggering achievements on their own. They're also remarkable examples of humanity's ability to endure and keep raising the bar."

Whenever he is competing in a race, athlete Eliud Kipchoge exclusively takes water from one man.
Entertainment
4 months ago

Grace mentioned that their three children Lynn, Griffin, and Gordon are stirred to see their father conquer odds.
Entertainment
4 months ago
WATCH: For the latest videos on entertainment stories