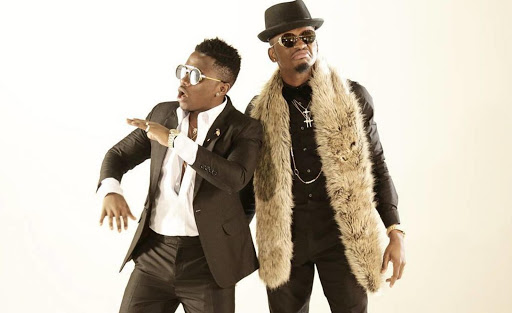 WCB singers Rayvanny and Diamond Platnumz the two have released a new song together
Image: Instagram

Tanzania's bongo stars Rayvanny aka Chui and Diamond Platinumz aka Simba have left fans shocked after they dropped a song together.

It has been three months since Rayvanny dropped any music and this new banger dubbed "Nitongoze" is far from what people were expecting.

No one saw him and his former boss Diamond working on anything any time soon following Chui's premature exit from Diamond's record label Wasafi Records.

The song which was released barely a day ago on Vanny Boy's YouTube channel has already garnered over 313 thousand views and 18 thousand likes and is currently number 18 on trending on YouTube.

This comes as a huge surprise following the major disagreements the two have had in the past.

First, you all remember Rayvanny announced he was exiting from Wasafi records before his contract had come to an end this led to Diamond charging his former signee TSh800 million (KSh40 million) to terminate his contract.

Rayvanny is said to have left the label to focus on his own music label dubbed Next level music.

He had not been cleared to perform at any concert until he fully finalized terminating his contract with Diamond's record label.

This came after he put up a performance at Nandy's festival in August.

But it seems the two have sorted out their differences and are made good and Vanny Boy holds no grudge even after all the money he was forced to cough up.

Revealed: Rayvanny set to perform in Nairobi over the weekend

Former WCB signee Rayvanny will be in the country over the weekend.
Entertainment
2 weeks ago

In 2020 Rich Mavoko was asked by Diamond Platnumz to pay Tsh500 million (Sh23 million) before quitting the label.
Entertainment
3 months ago