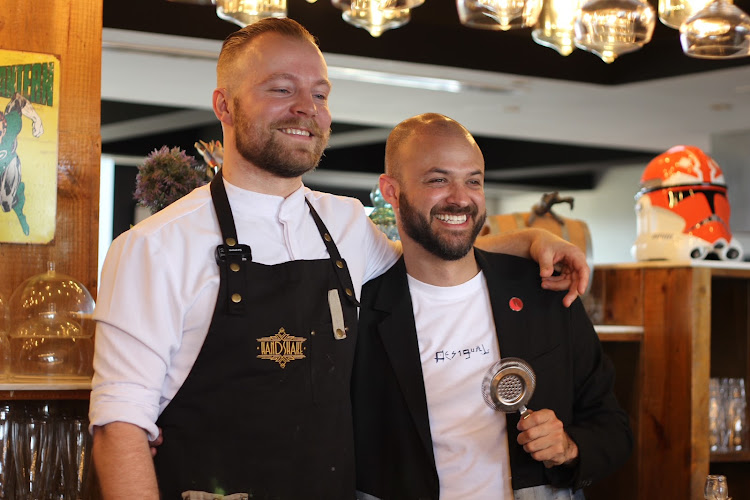 Award-winning bartenders Rodrigo Urraca and Eric Van Beek from the number one bar in Mexico the Handshake Bar just landed in the country and they’re already disrupting the bar scene!

The two (who are being hosted by Hero Bar and Restaurant) mused over how excited they were to be in the country.

As they added that they will be spending a week in Kenya working alongside the bartender at Hero to create a fusion of magic between their craft and Kenyan craft as they learn/ teach each other.

During an interview with Hannie Petra, Eric revealed that his inspiration comes from everyday things and his desire to be unique.

With a little hint of trying to incorporate his favorite foods into drinks.

Eric is known for his unconventional drinks as he has crafted his own style to handcraft cocktails such as using fat washing, carbonation, milk punching, and distillation.

He emphasized that their bar is intent on focusing on three pillars of flavor: aesthetics, flavor, and innovation.

Eric and Rodrigo’s style seems to be working out super well because just a year after opening up their bar (Handshake Bar) it has been racked at number 25 in this year's World Best Bars top 50 lists.

If you’d love to experience the amazingness that is Handshake bar they’ll be having a night out at Hero bar ( which was ranked number 68 on the list) on Friday and Saturday evening where they’ll be preparing cocktails for guests.

A ticket goes for a price of 4200/= per person and for that price, guests will get to enjoy 3 signature cocktails from their detailed list.

Details of how win a free trip to Dubai

The Nairobi edition of the ongoing Dubai Tourism Roadshow, hosted by the Dubai Department for Economy and Tourism and is offering
Lifestyle
2 months ago

Desy Darmawan from The First collection Group of hotels explained to participants in the roads what they need to know when planning a trip to Dubai.
Lifestyle
2 months ago
WATCH: For the latest videos on entertainment stories