How to perfectly prepare scotch eggs 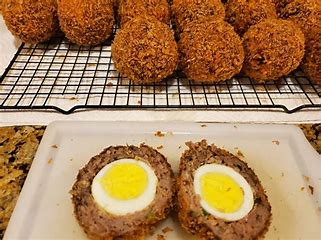 Breakfast is the most important meal of the day; it jumpstarts your body and mind so in that regard I feel that it's only right if it's not boring.

This recipe is a delightful treat for egg lovers.

Takes a little bit less time to prepare than a scrambled omelette as well so you do not have to worry about time. Plus, you can just prepare them the day before and then warm them up in the morning.

Below is the recipe:

Place eggs in a sufuria then fill it with water until they are fully covered.

As the eggs boil, in a bowl, remove the casing from the packed sausages and put the meat in a bowl.

Using a spatula/fork mix all the ingredients.

Note: If it's too sticky, drizzle a bit of flour on the sausage meat and mix well. Remove the eggs and let them cool for a while, then peel off the shells. 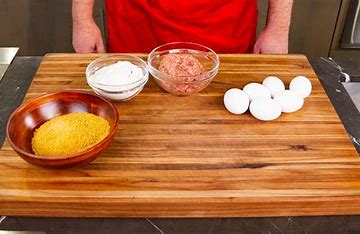 Scoop a tablespoon of the sausage meat, pat your hands with a bit of flour, and knead the meat slowly with your hands, squeezing it flat with your hands and then laying the egg on top of the meat.

Cover the egg with the meat then roll it slowly until the sausage meat completely covers the egg.

Note: for a crunchier feel at the top double dredge.

Dredge the egg in the flour and breadcrumb mixture, roll it then dip it in the beaten egg then dredge it again in the bowl with the breadcrumbs, and roll.

Place a saucepan with oil halfway filled on medium heat and place the eggs.

Turn them as they cook, to cook evenly.

Let the eggs cook until they are golden brown and appear crispy at the top.

Set them aside in a tray covered with kitchen towels to cool and drip off excess oil.

Ps: these can be had any time of the day and can be served as canopies for guests at a party as well. And they're not from Scotland contrary to popular belief, they're actually a traditional British meal.

How to perfectly cook ugali without flakes

How to achieve soft, fluffy chapatis

Chapati also known as Phulka or Roti is an Indian flatbread made with finely milled whole wheat flour
Lifestyle
1 month ago
WATCH: For the latest videos on entertainment stories