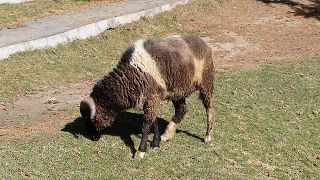 A sheep together with her lamb were arrested on Saturday after eating fish from a trader in Borno State, Nigeria.

The fish seller, Mr Malam Yusuf Ibrahim reported that the sheep has been notorious at eating his fresh fish over the last five years.

The sheep has now been released after Mr Malam forgave the sheep following a meeting between him, the owner of the sheep and community elders.

It was agreed that any repeat of the sheep's misbehavior would lead to legal action.

A security analyst said, "The big heart exhibited by the fish seller and the capacity he exhibited of tolerating the sheep’s endless raids for five years, was impressive and highly magnanimous and thus deserving of his reward, " Zagazola Makama is quoted by Linda Ikeji.

Nigerians have reacted to the news, most of it being hilarious reactions;

Foodie dat cooks: You get luck If you like go thief another fish again You’ll spend the rest of your life in jail Thiefy thiefy.

Yung alhaji: police arrest animal and the complainant later forgive the sheep and sheep was set free ? Look at what we have been reduced to in a 21st century

Mgc4c4: the sheep was forgiven by the victim 😂 9ja cruise country

I,tobilola: This country should be on Netflix.

Lajcosystem: But wait, if em no forgive the sheep, what will the police do to them?

Milonashshaka: I haven’t laughed this hard for a while 😂😂😂😂😂😂

Obinna reacts to Amberray being stranded in Mauritius

Amber had invited Obinna for her birthday before she cancelled on them because her lover, Ken Rapudo had plans
Trending
4 weeks ago

Aaron' Cartrers body was found at his California home on Saturday. No cause of death has yet been disclosed
Trending
4 weeks ago