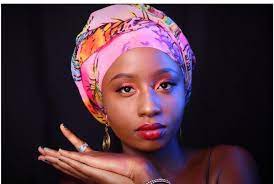 Following a viral video of a guy who hosted his white-themed birthday party at a graveyard in Ghana, Kiss drive presenter Cyd Wambui, confirmed that if she was friends with the birthday boy she would not have chickened out like some of the guests.

She would have actually showed up just to see how the party went down and the vibe of the place as it is such an interesting phenomenon.

According to Cyd, the birthday boy decided to throw his party in the most absurd place possible, a cemetery.

" If your birthday is coming up, maybe you should consider holding it in this place.... a graveyard. Hear me out.... please hear me out, there is a guy who is going viral, for doing just that.

So he organized a birthday party at a graveyard site, he invited friends and told them there was going to be lots of food and drinks... You know what, I think I would go. I would just go to see what it is like.

I don't know if you would, but I mean free food and drinks... aahh mimi ingetokea ( I would definitely show up.)" Cyd said.

I honestly feel like this guy is in the same Whatsapp group as guys who have been asking if God has created any new animals because beef, poultry, and seafood are getting boring and too cliche.

I mean we have birthdays since birth and it is the same old places, in a hotel, in a club, picnic, in the house and bruh like it has all been done so the guy wanted some excitement in his life.

I know he was probably hoping a ghost would pop up or like the ground shakes or something.

Imagine how cool that was as a birthday story, Halloween coming to life.

In the trending video, the group is seen having fun and taking pictures, at the cemetery, disregarding the fact that it might be unhealthy and really inappropriate to hold a party at the graveyard.

Murugi Munyi lied to her then man she was pregnant so that he would send her abortion money for her to go partying
Entertainment
2 months ago
WATCH: For the latest videos on entertainment stories