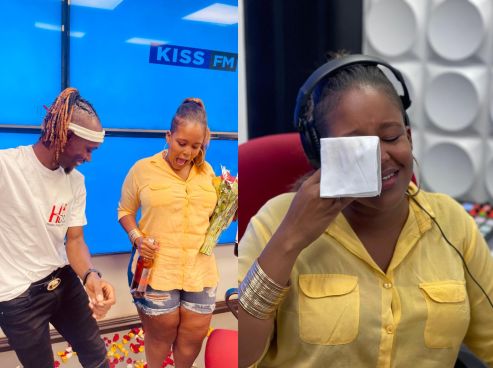 Popular dancer, Moya David has surpassed over 2.8million followers on TikTok, becoming the most followed Kenyan on the social platform.

Moya is known for his popular dance challenges which has made him a household name.

For the past few months he has been known for popularizing the 'Mi amor' song by Tanzania's Marioo and Kenya's Jovial.

He has been hired to surprise people among them his fans, growing his popularity in the process.

Taking to his socials to celebrate the mark, Moya thanked his adoring fans who have made him go 'from strength to strength'

"I am incredibly proud to reach this amazing milestone. I know I couldn’t have made it without you, and that’s why I won’t rest on my oars; I will keep serving you premium content, just the way you like it Thank you for your amazing support. I became an influencer here because of your constant engagement with my posts." Moya's post read in part.

He cautioned Kenyans against people who purport to be him on social media with an aim of defrauding unsuspecting people.

"I am overwhelmed by your comments, appreciation, likes, and shares Thankyou fahm last one be aware of scammers & cons Trying to use my name to extort money From you with fake bookings and online jobs using my name make sure you book with the right account & contact."

Moya signed off by announcing that his job has opened doors for him and he's due to travel to Zambia today.

"A smile remains the most inexpensive gift I can bestow on anyone and yet its powers can vanquish kingdom's @moya_suprisesltd We take the lead positive vibes only. Zambia see you on 1st June we going International am Grateful to God." Wrote Moya.

Sensational Tiktoker Moya David, best know for the cheer he brings about by serenading random strangers with his captivating moves turned an year ...
Entertainment
9 months ago

On Saturday, Moya was spotted teaching Kiss FM's Oga Obinna's kids how to dance to 'Mi Amor' and it is fair to say that, even if the comedian spent a ...
Entertainment
8 months ago