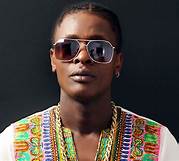 Ugandan singer Jose Chameleon is yet again on the news for some not so right reasons.

According to reports, the singer spent a night in a South African jail over the weekend. Apparently, Jose was held by police at a hotel in Sandton, South Africa before his performance.

Jose landed in South Africa on Friday for an event he was set to headline in Randburg, South Africa on Saturday night. He posted on his Instagram page a video of him boarding his flight and captioned it , " South Africa in a few."

Before posting another on on arrival in a vehicle vibing with his friends. He captioned it, "music man in the city!!! Sandton!!! Johannesburg show time #Legend."

The arrest was as a result of the singer being hunted by South African based promoter Zaina Muwonge who is demanding a refund over over half a million Kenyan shillings over a breach of contract 7 years ago.

Zaina is said to be demanding a refund of 588 thousand for allegedly skipping a show she had organized and paid for back in 2015.

Jose on his social media addressed the chaos but did not give full details of things. He however hinted that the claims were fake and meant to crash him.

"All this meant to intimidate and fail a fellow Ugandan in the name of self-interest? Well, I guess it’s not the way it should be. My South African fans let’s stay strong and let the music talk! Why stop the show tonight?

Following reports of his altercation with Zaina a hashtag under his name with videos showing Jose's posters being burned as protestors demanded for the show cancelled surfaced.

Chameleone’s sources have however dismissed the arrest rumours urging members of the public to ignore propaganda.

“Disregard any rumours about Chameleone being arrested. I'm live and direct on the scene,” Batt Badru, Chameleone’s close friend wrote on Facebook.

He later on shared a live video with the singer, his brother Weasel, and other friends at a hotel.

Chameleon also shared a post on his Instagram thanking Cape Town for the love. He wrote, "It's a wrap!! Cape Town. Thank you all my special people and the spirited promoters with whom we beat odds. #Legend # Forever."

The man ditched traditions and assumed his wife's surname upon their marriage
Entertainment
3 weeks ago
WATCH: For the latest videos on entertainment stories