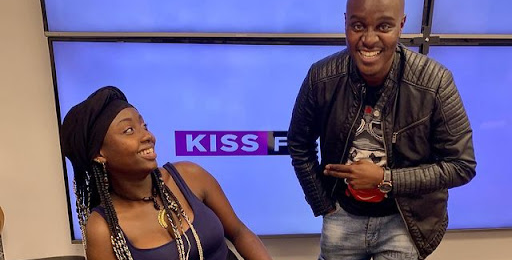 Cyd took to our airwaves to narrate a story of a man who had caused a frenzy online when he took his wife's name during their wedding ceremony.

"A man on social media is going viral for taking his wife's last name. He has proven that it can be done! Toxic masculinity is an individual handicap, those ideals that men put for themselves claiming a man should be like this or that, are your own. Those are for you, there are men out there who are trailblazing," Cyd said with excitement.

Chito rolled his eyes as he could not comprehend this unnatural phenomenon that Cyd was not only narrating but praising as well.

"As you roll your eyes...." Cyd started before Chito cut her off defending his take and distancing his stance from toxic masculinity

"It is not toxic masculinity or anything it is just what it is. Ideally, for me there is no way, ain't no way!" Chito said in regards to the subject at hand.

He went on to defend his stand as Cyd laughed at Chito's reaction.

"You see, this is how I'm going to put it... To take on your wife's name is to take on her father's name. Why should I take your father's name? Don't I have my own? " Chito asked.

But in my opinion, that statement beats logic, because then a lady would argue why should I take your name? Don't I have my own? Did my parents not name me?

Cyd tried justifying the phenomenon but Chito was not having it.

"Listen... but If your wife is taking your name, isn't she taking your father's name," Cyd said trying to prove that there was no difference really.

The two got into an argument trying to settle the matter.

Chito explained to Cyd that the wife would not be taking his father's name but his name but Cyd countered by pointing out that it is a family name so there's no difference really.

"Depending on the culture you come from... in Kikuyu culture if my name is Chito Mwaura Ndhlovu, I am Chito Mwaura so in Kikuyu which name will she take?" Chito asked Cyd to which she replied, the middle name Mwaura.

"So to take on Mwaura, if you are called Cyd Wambui Mwaura, I'll be taking on your father's name!" Chito said victoriously upon realising he had won the argument.

"God forbid! I already have an identity you will not confuse me," Chito said ending the discussion.

What are your thoughts on this? And does that mean that women do not have identities? Let us know below.

A woman had claimed the father of her kids was deceased and was suing her ex husband for child support
Entertainment
8 months ago
WATCH: For the latest videos on entertainment stories