How Edwin Chiloba met his adoptive parents after family rejection

Chiloba said he was rejected by his family in 2015, after his father's death. 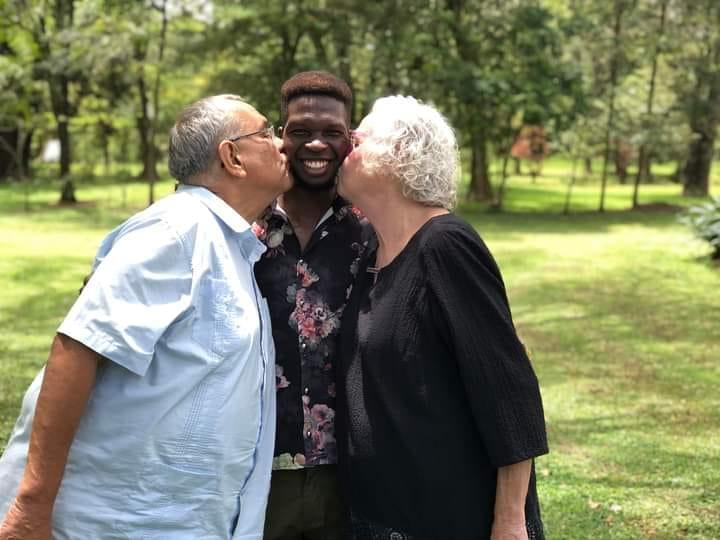 Speaking in an interview with Ebru TV two years ago, Chiloba narrated how, shortly after landing a modelling agency in 2019, he met Peter and Donna Pfaltzgraff.

Chiloba said Peter, who was his Facebook follower and loved his sense of fashion, requested him to design shirts for him and Donna.

They invited him over for Christmas, where he spent four days with the Pfaltzgraffs, before telling them his rejection story.

"After Christmas, I was supposed to go back to Eldoret. But then I remembered my story of rejection and the hardships I had been through, and started crying," he said.

The late model said this prompted the Pfaltzgraffs to be curious about him, leading to him telling them his story.

"I remember them crying. They were really touched. They then told me not to worry, that I was their son. They adopted me," he said.

The activist said his adoptive parents later enrolled him at the University of Eldoret, where he pursued a degree in fashion and design.

"They accepted me as their son and accepted to pay my school fees."

On January 7, the Pfaltzgraffs penned touching tributes to him, asking for prayers.

"Our hearts are broken tonight. Will give more details when we can share more. Please pray for us."

Chiloba said he was rejected by his family in 2015, after his father's death.

He said his family's hostility towards him emanated from his love for fashion and modelling which they considered somewhat weird for a man to pursue.

He also said his sister stopped paying his fees at Moi University during his third year of study leading to him dropping out.

This was after he told her that he had a passion for fashion.

"My sister said she did not want anything to do with me. Everyone disowned me in the family, they said I'm evil and cannot stay in that family because I would negatively influence their children," Chiloba said.

The fashionista narrated how his friends stigmatised him after he was rejected and walked away from home.

"Some would come with their friends and tell them I'm homeless after being chased from home. They would even say I'm gay and other hurtful things that really affected me," he said.

At this point, he said, he had learnt that he had to depend on himself.

"I did not give up. I decided to focus more on fashion and modelling," he said, adding that, that was in 2018.

Chiloba was found murdered and his body was stashed in a metallic box along the Kipenyo-Kaptinga road in Kapseret on January 4.

An autopsy conducted on Wednesday by government pathologist Johansen Oduor revealed that he died from suffocation caused by socks stuffed into his mouth.

Five people including his roommate Jacktone Odhiambo with whom he's believed to have had a relationship are in police custody awaiting the completion of investigations and possible arraignment for murder.

He will be laid to rest on Tuesday.

Ever since the family of murdered LGBTQ activist Edwin Kiprotich Kiptoo, also known as Chiloba announced that their son wasn't gay Kenyans have been ...
Trending
2 weeks ago