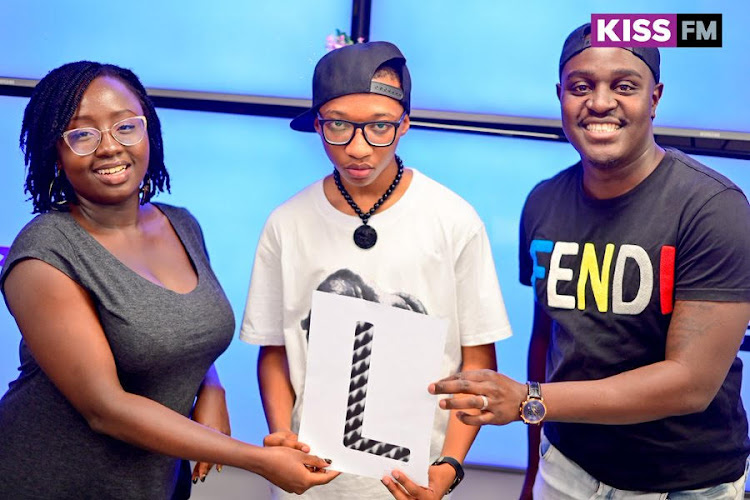 The L comes in just days after the rapper dropped a freestyle diss track in response to the presenters discussing him and his much anticipated KCSE results on their afternoon show.

As if the freestyle wasn't enough, The 18-year-old made his way to Kiss FM studios together with his crew to meet the presenters.

Trio Marching in with a white sheet of paper with the letter 'L' (standing for 'Loss') printed on it in checked black and white.

He then proceeded to hand it over to a Cyd who couldn't help but burst into laughter upon seeing the message. She then handed it to her co-host Chito.

The L had been signed at the bottom by Trio's name.

Responding to Trio's move, Chito took to his Instagram to say this:

"Wueh! @triomio_official delivered an L personally to us.

After this week's freestyle that he released in response to a conversation, we shaped about him last week.

Yesterday, he came in with a whole squaaaaad. The young lad moves with lots of people. One would have thought a brawl was about to break out.

We took the L. Looking forward to great music from him!" Chito's post read.

Their supposed beef started off when Chito went on air a few days back with a warning to Trio in regards to his music and his career now that he is done with school.

This came about as Chito and Cyd picked up online banter about Trio's post-high school future.

“I am waiting for his music post-KCSE. Already he has released one song and guys are saying that the pressure of KCSE was what was making him release good music.

This year is his make-or-break point…if he passes this year and doesn’t put out like a major hit, imagine he’ll be forgotten,” Chito quipped

Following this, the teen took the presenter's words as fuel to drop another banger that's being termed by many as one of the hottest diss tracks.

In it, he spits lyrics about how he won't be defined by his exam results and throws in some slick social commentary to boot.

He starts the verse off by sampling an on-air conversation between the two radio hosts who urged the rapper to put effort into his music, so as to avoid sinking into oblivion.

But, Trio went hard with his freestyle and started by asking what Chito was talking about before his rap begins.

Kenyan rapper Trio Mio is currently trending at number one on Twitter as Education CS Ezekiel Machogu announces KCSE results for the year 2022.
Entertainment
1 week ago