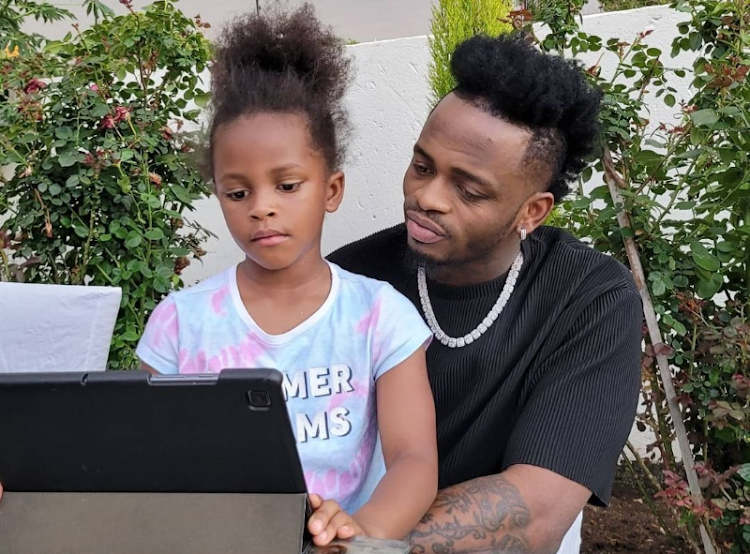 Diamond Platinumz is in the country people and it's not to see his son with Tanasha or for a big concert you might have missed.

The bongo superstar is here to perform in Azimio's final rally!

Yes you read that correctly he is in the country for a short stop for Baba and Martha's last campaign.

Ladies and gentlemen today marks the last leg of campaigns in Kenya as the nation gears towards the much anticipated general elections and Azimio decided to go all out for their last day.

The 'Kwangwaru' hit-maker was in South Africa with his family to celebrate his first daughter Tiffah Dangote who is turning seven years today. He however cut his trip short to make the appearance for the rally.

The 31-year-old jetted in with his first born daughter Tiffah to perform at Kasarani Stadium where Raila Odinga's Azimio La Umoja One Kenya Coalition party is holding its final rally then return to South Africa for his daughters party later tonight.

Diamond last performed in Nairobi back in December 2018 during the Wasafi Festival to mark the New Year celebrations. And this is the first time his daughter Tiffah has visited the country although her mom has been here on several occasions

This is not the first time the Azimio camp has brought out a high profile artist to perform in their rallies. Last month Raila Odinga invited Congolese star Mbilia Bel to perform during one of his Azaimio rallies.

He termed her as a good friend.

In a bid to appeal to more youths the camp has also been working with several Kenyan artists such as Bahati and also had youngin' Trio Mio performing at one of their rallies.

Kamene-I feel like I have heard this manifesto before

In 2020 Rich Mavoko was asked by Diamond Platnumz to pay Tsh500 million (Sh23 million) before quitting the label.
Entertainment
1 week ago

Diamond is seen posing for the video as he flaunts the black t-shirt
Entertainment
2 weeks ago
WATCH: For the latest videos on entertainment stories