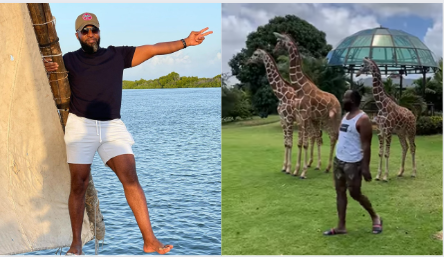 It's just been weeks since he left office and not only is his glow impeccable but he's also turned into a lavish lifestyle of chilling with wildlife and playing golf.

And no, when I say hanging out with wildlife animals, I'm not talking about taking a vacation to the Mara or Tsavo. Joho is out here living like Pablo Escobar reincarnate.

Joho shared a video on his official Instagram page which boasts over 1.2 million followers ( and he follows no one back! Can you imagine that?) of himself in shorts and a white vest walking in a well manicures lawn where he then proceeds to stand next to three giraffes admiring them.

Clearly in a humorous mood, the former governor turns to the giraffes and goes, " twendeni... let us go, let us go guys c'mon," as he waves his hand towards the animals while walking away.

And as if on cue, the three giraffes stop idling around and proceed to follow him as he chuckles softly.

He captioned the video, " My friends!" 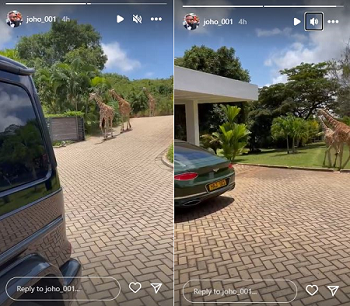 The video comes shortly after he trended over the weekend after he showed off glimpses of his expensive garage with a luxurious car collection including his Mercedes G Wagon that goes for around 17 million as well as his customized Bentley with has his own vanity plates.

In the video netizens caught glimpses of the giraffes walking casually around the compound prompting people to assume the former governor owns the animals.

However, netizen sleuths have been quick to point out that in the recent video, Joho is at a  scenic private residential golfing resort in Kilifi known as Vipingo Ridge and not in his own compound.

You really got to love sleuths and keyboard warriors ( well sometimes) either way Joho seems to be taking time off, relaxing and turning into somewhat a social media baddie.

"People have always lied that I am dating this and this person but to say the truth, I have not dated any of those people you have linked me to," ...
Entertainment
9 months ago

'No hope of reconciliation' as Joho's wife files for divorce

Madina Giovanni Fazzini said her marriage to Joho was beyond reconciliation as it had broken down irretrievably with no chance of revival.
Entertainment
10 months ago
WATCH: For the latest videos on entertainment stories