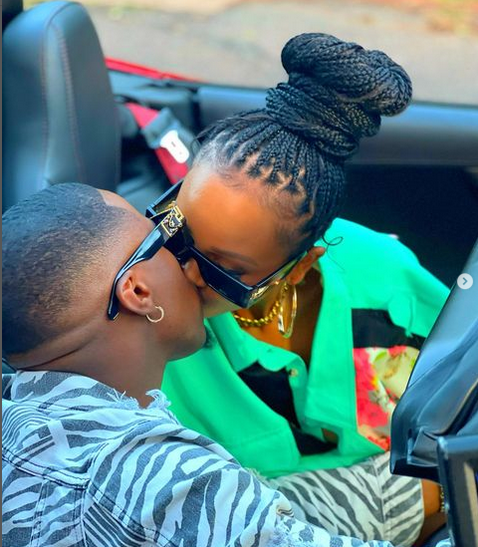 Juma Jux and Huddah Monroe have continued to flaunt each other on social media.

Huddah shared a post describing the Tanzanian singer as her 'Baby. "My baby and I," she wrote.

Jux responded; "My Rich," he added a rose and winking emoji.

This comes just a day after the release of Jux's song, 'Simuachi', in which he featured the Kenyan businesswoman.

In the music video, the two are spotted kissing severally which has raised questions from fans on whether or not they are dating.

But Jux has maintained that they are just good friends as Huddah is dating. In another post, Huddah shared a photo kissing Jux and captioned it;

"Have you ever seen me kiss anyone? Loool! There you go."

In a recent interview, Juma Jux denied the claims;

Responding about their vacation in Zanzibar, he said;

"There is nothing like that. Nothing. That one in Zanzibar? It was a very long time ago."

Adding, "If I was spotted with her or met her, It could be normal just as friends do meet and hang out."

Huddah was seen wearing Jux's jacket, which he also refused the claims.

Jux was rumoured to be dating a Rwandese lady but the two have since gone on the low key since she hinted she was heartbroken. She has shared a heartbreak emoji on social media.

Huddah on the other hand has been keeping her love life private.

She posted on her insta stories asking Kenya's biggest celebrity site to hook her up with the sprinter
Entertainment
8 months ago
WATCH: For the latest videos on entertainment stories