Octopizzo has weighed in on the furore that King Kaka’s spoken word piece, Wajinga Nyinyi has caused. The furore saw King Kaka trend for a long couple of days with the usual cabal of keyboard samurai tweeting their unmitigated support for King Kaka.

Octopizzo has been watching everything unfold and he decided to respond to what he is seeing unfold. In a series of tweets, Octopizzo agreed with King Kaka’s sentiments on the Kenyan government saying about the government of Kenya,

That’s apathy & it has led us to where we are today, did you know the same politicians always fund campaigns to make you stay at home? WE HAVE TO VOTE!! Every time.

!f you gaze long enough into an abyss, it will gaze back into you. Power does not corrupt, fear corrupts, perhaps the fear of loss of power. No matter how corrupt, greedy, and heartless our government, our corporations, our media, and our religious and charitable institutions may become, the music will still be wonderful.

Where he, however, differed with King Kaka was when he tweeted out the following response: 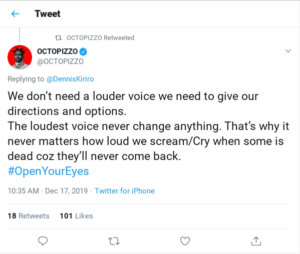 We don’t need a louder voice we need to give our directions and options. The loudest voice never change anything. That’s why it never matters how loud we scream/Cry when some is dead coz they’ll never come back. #OpenYourEyes

Suited and Booted: List of male celebrities who look dapper in suits

Photos of portraits of celebrities done by Kenyan artists

Rituals and brothels? Diana Marua bursts after being accused of theft...

‘Lean on me’ hitmaker Bill Withers is dead

‘I love kids!’ Anerlisa opens up on plans of having children with Ben Pol...

Back with a bang! Muliro reveals why she has been silent