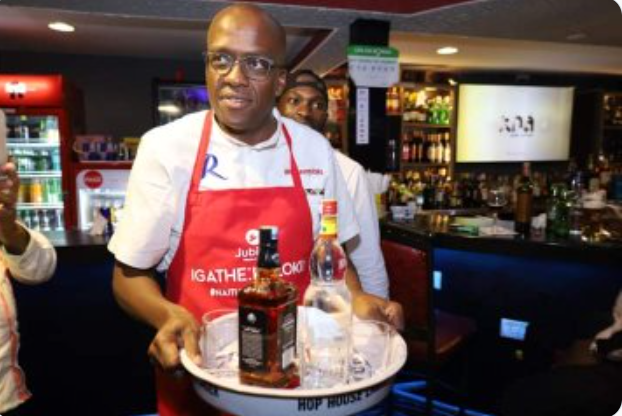 Nairobi Governor aspirant Polycarp Igathe, has recently been the talk of town after his campaigning skills went viral.

From clips and photos strolling online, Igathe campaigning strategy appears unique compared to his fellow competitors as he is doing the ‘odd jobs’ for the normal Kenyan.

Going by his slogan, #Nairobimnavyoitaka, Igathe has been seen selling products from a basic Kiosk, having a cup of tea in a local café, getting a haircut from a local barber shop to even touting in a public transport vehicle.

Igathe’s campaigning strategy became a topic of interest over the past few days when the aspiring politician was captured serving drinks in a club.

On Monday’s Morning Kiss, Kamene and Obinna shared their reactions as each explained why different aspiring leaders should emulate Polycarp’s door to door campaign strategy.

Kamene argued out that despite politicians serving people for a positive PR, they should also spoil their supporters, and eventually pay for the accumulated bill.

Obinna, on the other hand added that, “I feel like our politicians are trying too much but in the wrong place, first of all going to a club is not the right space because all those drunkards will not be able to remember you come tomorrow.”

He continued to say that, “For me I feel like it is too much, I won’t use that word but we are also not stupid.”

According to Kamene, she is only enjoying the schemes for entertainment value as Obinna joked that he should now call Igathe to work on his dirty laundry.

However, the two admitted they love Polycarp Igathe’s campaign strategy compared to his rivals.

Polycarp Igathe becomes a waiter in Nairobi.- But what won't these politicians do to show they're “one of us”? @KameneGoro @ogaobinna #KameneAndObinna pic.twitter.com/GEshTGoZGf

Foreign investors have been advised to focus on marijuana business in Zimbabwe.
Entertainment
1 month ago

The bag, whose design takes after the head of a lion had been placed under a flower bed, and it looked like a lion waiting to attack.
Entertainment
1 month ago