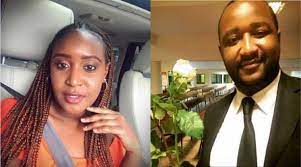 If you all were keen then you did notice that the Betty Kyallo's older brother Brian Kyallo was a no show at his sisters event last week as the Kyallo damsels launched their reality TV show, Kyallo Kulture.

I'm not sure whether it's clout in an attempt to help his small sisters show sell, (highly doubt as the sisters on their own rack a very big following and the nation is dying to watch their show) or it is true there is trouble in the Kyallo household.

Yes, sibling rivalry is a common thing but it does not crop up overnight.

Brian Kyallo had put up a question and answer tag on his Instagram stories ( it seems to be the latest trend with media personalities and celebrities to connect with their fans and share their two cents) and guys did not hold back with their questions.

A curious  netizen, responding to the QnA sticker asked him, " why are you never on your sisters' occasions?"

To which he replied, " Coz they bow to the Queen. I do not align with that worldview. #two chains #amdifferent" accompanied with a laughing emoji.

Netizens were curious as to what he meant by "they bow to the queen" but Brian did not give further details.

Just like his sister, Brian is in the media industry but he is more of the behind the scenes type of guy. He has a successful media career one, as the director for the XYZ show which won the prestigious 'Best TV Show,' Africa AMVCA awad soon as Brian started directing it,

Secondly, he has also directed XYZ’s sister show ‘Ogas at the Top’ and ‘Rush’ starring Janet Mbugua, shows which have been AMVCA nominated.

However, their relationship has not always been rocky or questionable. Back in 2017 when Brian revealed he was diagnosed with Bipolar disorder type 2 he gushed over how his sister Betty was always there for him and would take him for check ups even when she had her own share of problems to deal with.

In an interview Brian said, " I have been dealing with depression as a result of bipolar for the last three years. Betty was always there for me even despite the fact that she was also going through her own struggles. She would go for check-ups with me and walked with me every step of the way."

And when Brian finally shared his story Betty sent out an encouraging message to him saying, "Bro, I'm so proud of you for coming out and telling your inspiring story. May you impact lives and families dealing with what you went through. I'm happy that you have gone through the fire and came out stronger with so much zeal for life. Love you to pieces."

And top of it all, Brian has publicly spoken in favour of his sisters if the occasion calls for it. So maybe it is a ruse or they did fall apart truly.... only time will tell.

'Not ready to get married,' Gloria Kyallo tells boyfriend

Mercy Kyallo's near death experience after an IVF