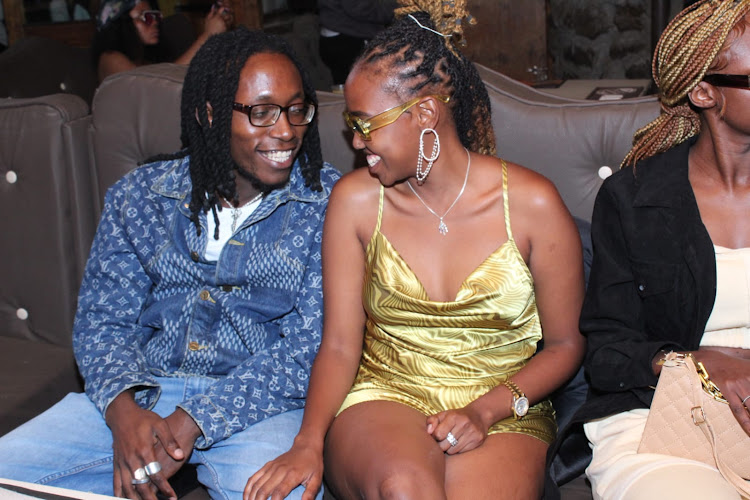 Bensoul with his girlfriend Noni Gathoni whom he said he is going to marry
Image: Moses Mwangi

Joining Kamene Goro on her ' Good Vibes Only' show, Sol Generation signee Bensoul revealed that he would marry his long-term girlfriend Noni Gathoni any day any time.

Kamene was curious to know how long the two had been together, with Ben excitedly replying," three years and counting, she is such an amazing human being"

Kamene clearly a romantic started gushing over the statement before adding that Ben should now wife up Noni. "You can't date a girl for three years! It's about time you marry her...."

To which Ben nervously laughing asked the Babes CEO not to rush him as everything takes time. " Hizi vitu hazina haraka... sina haraka."

" Would you marry her though?" A curious Kamene not ready to let the subject die asked the sensational musician.

Ben without hesitation said he will. Listen people he did not say, " I would" meaning he was thinking about it or it might or might not happen. He said," I will" with certainty.

" She has held me down in the craziest times, she is a real one. Trust me I know," Ben said with admiration.

Speaking about one of his most valued possessions Ben told Kamene ( who would not stop gushing over how fancy the guitar looked compared to others she had seen over the years) that the musical instrument had cost him 250 thousand Kenyan shillings!

A quarter million for a guitar! Excuse me while I go cry.

" It's a special one... it has its effects which are inbuilt, its sound just hits different. You cannot not fall in love when I play for you music with this one."

Ben started off before adding that if someone was to damage it, it would totally break his heart.

He went on to add that the guitar is insured, " I had to insure it in case of anything. This one they actually brought it for me from Dubai and getting one around the country is a hustle so I had to ensure I have everything taken care of."

Speaking about how the two met during a previous episode of Sol Generation Noni said, "We first met on social media, basic chats, nothing serious. Until this one evening when we crossed paths at an entertainment event,”

She went on to add that she was attending an evening birthday party of one of her girlfriends while Bensoul was there to catch up with his male friends.

“So I approached him and tapped him from his back then we chatted endlessly, had a good night and exchanged numbers,” she gushed.

'Thank you for making me a mum,' Bensoul's baby mama says

'I want a collabo with Fireboy,' Bensoul

Bensoul says Nigerian artiste is one of his best
Trending
6 months ago
WATCH: For the latest videos on entertainment stories