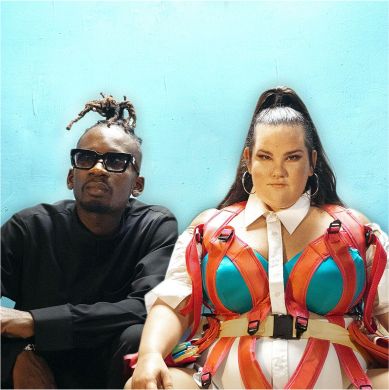 Global superstar and pop genius Netta has dropped “Playground Politica”, the next entry in a one-of-a-kind discography which showcases the colorful vision, and musical ingenuity, undeniable heart of one of the world’s most exciting musical mad scientists.

The Eurovision champ was recently praised by The Hollywood Reporter for “her humorous lyrics, quirk-pop persona and over-the-top fashion”, and this track, an Afrobeat fusion jam which features beloved Nigerian artist Mr Eazi, is an important and earnest moment in her groundbreaking career.

“Playground Politica” is a candy-coated pop gem brimming with celebratory pizzaz that is also the most personal track of Netta’s career, being the first time she has shared a reflection on her adolescence growing up in Nigeria.

It is a beautiful look at the life lessons she learned in Nigeria, tinged with a fittingly childlike aesthetic.

Before winning Eurovision with her monster smash hit “Toy” and earning 100s of millions of plays and streams across her entire catalog, Netta spent her formative early years in Nigeria where she attended an international school which shaped her early human experiences in a very special way.

“Playground Politica” captures the essence of Nigeria as her happy place, something she used to think about when she moved back to Israel and felt picked on by her peers, with the track title referring to the hierarchical nature of classrooms which she felt on the losing end of: “I was the fat unibrow kid with an accent that didn’t fit in.”

Mr Eazi’s appearance on the track is more than just a feature. He, like Netta, also grew up outside of his home country and attended an international school. “We couldn’t help but feel like in a parallel universe we could be in class together.”

Why Alikiba has been forced to cancel much anticipated US tour