Uproar as chief, teachers and mom mercilessly beat up a primary school boy 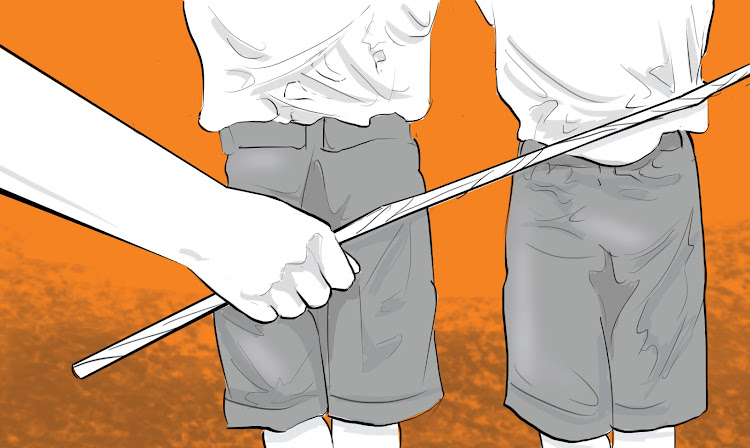 Kenyans have reacted sharply to a viral video of a student being tied up in ropes and receiving a beating from the area chief, his teachers and a woman said to be his mother.

In the video shared on Twitter, the male students legs are tied with a rope together with his hands. His knees are also drawn all the way to his face.

The  area chief is then called upon to instill discipline. He tells him he needs to be taught a lesson. He begins whooping him with a stick, as his right hand holds another stick to prevent the student from moving.

The student cries, seemingly in pain pleading with the chief to stop beating him.

According to accounts, the student threatened the teachers with a machete, resulting in the public flogging. Three other male teachers join in, and the woman.

The woman is his mother who says in the video that she warned him against such vices.

It is not clear when the incident took place, and appears to be in a primary school in Kisii.

The students' sharp cries horrify students who are gathered around looking on helplessly as he is beaten relentlessly.

The students asks for forgiveness but the beating does not stop as he cries uncontrollably.

Because of the disturbing nature of the video, Kiss100 will not post the video in this story.

Kenyans have reacted sharply to the video. Some of the comments are below;

@Olmoran09This is bad. How do grownups feel ganging up against a boy. Alafu wanamfunga kama punda. Nkt

@KayamoYafes·Where do we draw the line between instilling discipline to hardy and unruly children vs allowing them to carry out criminal activities and delinquencies in the name of "rights?" While I abhor corporal punishment, yet I find it necessary instead of committing this kid to jail.

@MaxwellMbae·What are you saying? Discipline is the responsibility of parents. Teachers should suspend or expel unruly students. Send them back to their parents who didn't instil discipline. Increase approved schools for dealing with ones who have completely failed to be governable

@WOkandah·Oh no, this criminals must be arrested! Bure kabisa

@nd_onyiegoWe will not let our boys end up in prison, we will discipline them in such ways whenever necessary. Threatening teachers and students with a panga is not something we are going to talk about. FYI the parents and chief are the ones instilling discipline here.

What to avoid doing with new DCI boss's phone number

Amin will take over from former DCI boss George Kinoti who resigned in September. He was transferred to Public Service Commission.
Trending
1 month ago

The Directorate of Criminal Investigations (DCI) has launched a manhunt for two thugs who escaped with ‘perforated hindquarters’ (gunshot injuries).
Entertainment
1 month ago
WATCH: For the latest videos on entertainment stories