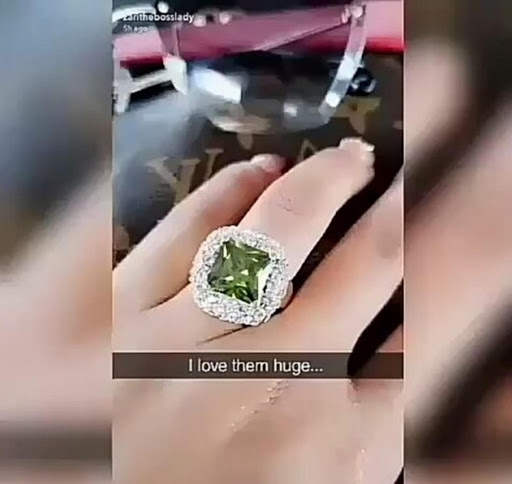 Zari flew to Tanzania from South Africa after news hit the net that she has a co-wife. You have all heard the story of Hamisa Mobetto claiming that he son was sired by Diamond.

Diamond responded to the claims in his singe Fresh.

Anyhow, Now Zari has gone to TZ to mark her territory. From what we know, Diamond may have put a ring on Zari to signify that she is the one and only one true love.

The Salome hit maker then posted a photo of Zari’s hand with what looks like a mega expensive green ruby engagement ring. Isn’t this proof enough that Baba Tiffah will be tying the knot with the love of his life Zari.

In a past interview with a Tanzanian based radio station, The Boss Lady said that Diamond would be going to see her father this year to finalize things.

She also said that her wedding would be the biggest one ever experienced in East Africa.

“We don’t want a small wedding. Our wedding should be one of the biggest weddings East Africa has ever seen. Meaning the budget has to be big.”

“This year we are visiting my dad officially. Diamond is OFFICIALLY going to ask for his permission to marry me. He has been to see my family a lot of times but now he is going officially. He wants to take that step this year.”

Let's wish the two all the best.

Here is a video of Zari’s ring: