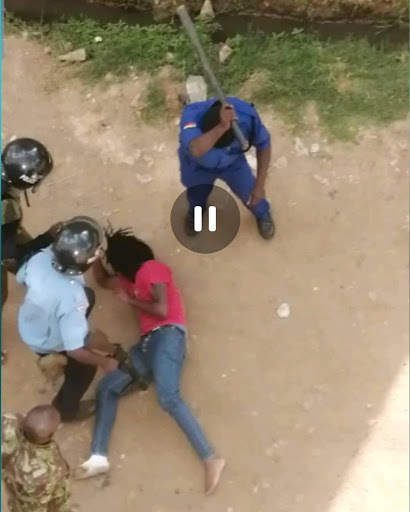 police thrash uni student
Police officers aren't highly regarded in Kenya, Nigeria or in Africa in general. They are often used as instruments of state terror and they carry out this function with a zeal that would be enviable in any other profession -say medicine.

And that is compounded further by the fact that most police officers aren't the best and the brightest of our education system, with the requirement for them to become officers being a D+ and a full jaw of teeth.

Perhaps that was the case here when police descended on students from JKUAt who were demonstrating and both male and female students were unlucky enough to fall afoul of egalitarian police officers who mete out beating across the board regardless of gender -true gender equality.

And Kamene Goro had alot to say about the viral video doing rounds that shows police officers tandikaing a uni student like ghasia:

Are we really going to be attacked by this state on all fronts????? How can we live in a country where everything in the system is working against it's people???? HOW??? How are we deserving of a Country that does this TO US!!!!!! I am so fed up with the despair and plight AND PAIN that comes with being a Kenyan!

Everyday we are confronted with the Terrible things happening in this Kenya, not buy Nature, by Nonsense, NEGLIGENCE & GREED!!! WHAT THE FUCK IS THIS?????!!!

Below is the video: