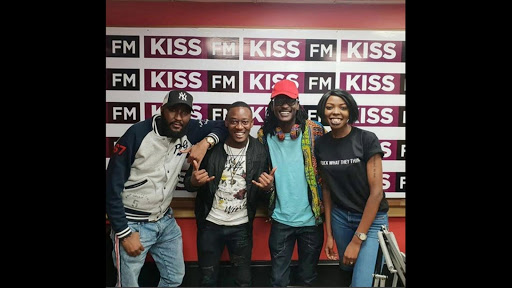 200371
Dan Aceda is one of the few artistes who started their music careers years ago and still stay relevant till date.

He has released three album in his career and today is a very special day for him as he is set to release his fourth album.

The album launch will take place at Alliance Francaise at 8:30.

In an interview Adelle and Shaffie on Breakfast with the stars, Dan shared the news stating that he is looking forward to the launch, also revealing the different artistes featured in his album.

He said, "Today is the release of my fourth studio album. I'm looking forward to that and it will be at Alliance Francaise and the show starts at 8:30pm. This album has had the blessing of many brilliant musicians like Fena, Etana, Sage, Prof and Red Acapella."

In a past interview on Kiss, he revealed three ladies he would love to work with.

He revealed that he would love to work with Baby T, Kush Tracey and Femi One. For a big star like him, you'd expect him to say rappers like Abbas Kubaff, Khaligraph Jones or Octopizzo, but that's not the case.

"People say I'm a bit nuts, but I'm actually very interested in working with three rappers and this is the list in no particular order. Baby T, Kush Tracey and Femi One. Those are actually top on my list. I'm such a big fan of their songs. I listen to their stuff everyday. I'm trying to find Baby T. I don't know when she's doing another song. How can she come, give us one jam and then bounce?" Dan explained.