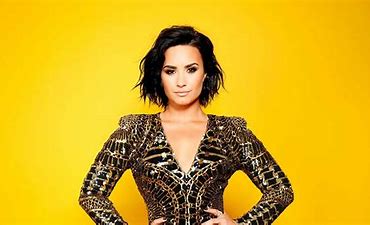 Way back in 2008, back when Demi Lovato was a fresh-faced Disney star, a reporter asked her about her taste in music and she excitedly replied, "what fascinates me, is metal."

The then 15-year-old went ahead to drop hardcore bands such as Dimmu Borgir and Job For A Cowboy.

Demi however aside from acting dived into pop music and boy did she have massive hits.

But we all know, the heart wants what it forever wants and 14 years later Demi is finally fulfilling her hearts desire with a Demi Lovato metal album!!!

Yeah you read that correctly people, Demi is back and she is rad!

Earlier on Demi posted a photo surrounded by her record label team and captioned it, " a funeral for my pop music," before blessing us with her eighth studio album, Holy Fvck, which is a sonic assault of razor blade guitars and throat-scorching vocals that strips away the radio-friendly veneer of her earlier material.

Speaking as to how the photo came to be, the star laughed saying "it wasn't an actual funeral, but I was in a label meeting and we all happened be wearing black and I was like, this is perfect because I'm not playing pop music anymore. This is a rock album."

In the new album Demi documents the latest twists in her complicated journey through alcohol and drug addiction, mental health issues, treatment and recovery.

She started writing the album after a voluntary stint in rehab last December, which exposed a lot of "unresolved trauma" from her 20 years in the spotlight.

"I had learned to honour my anger rather than shoving it down, which I had been doing for quite some time, and that really showed in the lyrics," Demi revealed.

Released on Friday, the album is doing amazing with one of her songs already being a hit on TikTok.

The opening track, Freak, addresses the hateful comments Lovato received after coming out as non-binary last year (she initially asked to be referred to as they/them but recently announced she was again accepting she/her pronouns)

Her other song, 'Eat Me' meanwhile, is directed at Lovato's old team, who packaged the singer up as a femme fatale and tried to tame her wilder instincts.

"Be more predictable, be less political... Clean and digestible, less of a spectacle," she drawls over a buzzsaw riff, caustically ticking off the advice she received.

"One of the lines is, 'Would you like me better if I was still her?'" says Lovato, "and I'm referring to a period of time in my life where I was this hyper-feminine pop star that everyone else wanted me to be.

"I was on stage in leotards and stilettos, and that's never been comfortable to me. And so Eat Me was definitely a song where I was talking about how I'm tired of spoon feeding myself to the public.

"That song is just basically saying, 'This is who I am, take it or leave it.'"

Georgina Njenga-I am beautiful regardless of my stretch marks

Adele told fans she was so happy to be back on stage
Entertainment
2 months ago
WATCH: For the latest videos on entertainment stories