Nicki's 'Super Freaky Girl', debuted at number one on the Billboard Hot 100 making her the first solo female rapper to achieve the feat in almost a quarter of a century 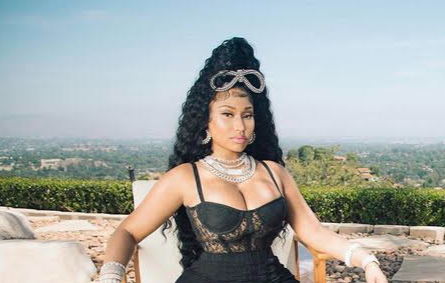 Barbie nation are having a field day after queen of rap Nicki Minaj set a new chart record in the US.

After releasing 121 singles in the last 12 years, Nicki Minaj has set a new record. But that is not all, the new mom's latest song, Super Freaky Girl, has debuted at number one on the Billboard Hot 100 making her the first solo female rapper to achieve the feat in almost a quarter of a century!

I'm so excited you'd think we are related! But hey isn't that what being a fan is all about?

But honestly the last time such an accomplishment happened was back in 1998, when Lauryn Hill's 'Doo Wop (That Thing)' entered the chart at number one.

And it also topped the download chart with 89,000 sales that is the highest sales week for any song in 2022 so far. Go miss Minaj! Oops she's a Mrs now.

This is such a huge feat as the song is Nicki's first number one as an unaccompanied artist and her third overall.

She previously topped the charts with 'Trollz,' a collaboration with 6ix9ine, and as a featured artist on Doja Cat's TikTok hit 'Say So,' both of which were released in 2020.

Minaj's biggest hit as a solo artist before now was 2014's 'Anaconda,' which peaked at number two.

Only one other solo female rap artist has topped the singles chart since 1998 and it's none other than Nicki's biggest competitor Cardi B.

Both of her number ones, Up and Bodak Yellow, entered lower down the rankings before climbing to pole position.

Still on, Minaj's big accomplishments she is due to receive the Michael Jackson Video Vanguard Award at this weekend's MTV Awards, where she will also co-host and perform.

Mdomo, a collaboration with Ibraah, gained over 1.3 Million views in just 24 seconds
Trending
9 months ago

The Recording Industry Association of America announced on Tuesday that Eminem has broken the record for most gold and platinum rated singles in ...
Entertainment
10 months ago

Khaby Lame breaks record as the most followed TikToker

Khaby Lame caught up and dethroned Charlie D'Amelio, who was leading at 142.4 Million followers
Entertainment
7 months ago

Demi Lovato from a young age expressed love for rock music but never pursued it till now
Entertainment
5 months ago
WATCH: For the latest videos on entertainment stories