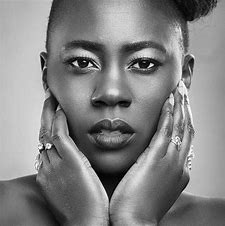 Sharing a photo of herself the singer took the opportunity to let her online audience know that "alioga akarudi soko and ashaapata mteja or is it customer?".

Akothee captioned the photo, "I am not single anymore, you can, take this to the bank. Happy Sabbath."

Earlier she had posted several videos of herself tidying up and getting ready for church.

She'd also posted a picture with the same colorful dress captioning it, " whose wife on a sabbath day. Happy Sabbath."

She could be pulling our legs but just the other day while gushing over Anyang Nyong'o and his wife she did say that still believes in the institution of marriage and love.

Or it could be a ploy, maybe she is talking about her relationship with God, remember Tiwa Savage revealed much to everyone's surprise that her hit song with American artist Brandy ' Somebody's Son' was talking about Jesus.

Sheesh, it is hard to tell but Madam Boss just said we can take her words to the bank so we'll do just that.

Before the posts, Akothee had turned into a motivational couples counselor taking to her Instagram to advise on relationships.

Relationships with trust issues can never hold water, invest your time in your partner and your relationship. All the energy you waste jumping from one bar to the other will never sort out your financial issues or marital instabilities.

She then went on to add, "If you are in a relationship, build trust and let your partner be comfortable with where you are with whom. No one wants to be lied to."

The announcement comes in just as people were speculating that the mother of 5 has a new mzungu bae after she was seen getting all cordial with the man online.

It's also just 3 months after the entrepreneur announced her breakup with her business partner/manager Nelly.

While talking about the breakup she revealed that relationships drain her days after breaking up with her manager Nelly Oaks.

She wrote, " it's just a personal decision, I need time to concentrate on my newfound happiness with less destruction.

I need to work on myself and my career, I am not ready for any commitment."

Akothee gives reason she broke up with Nelly

Akothee and Nelly Oaks rekindled their relationship last last year with many thinking that they would go the distance
Trending
3 months ago
WATCH: For the latest videos on entertainment stories