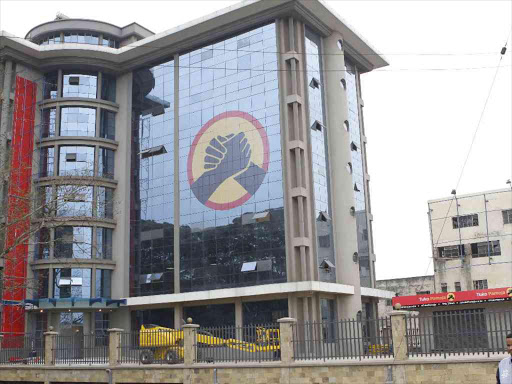 Jubliee Party Headquarters The building is set to be auctioned
Image: The-Star

The Jubilee Party headquarters building which is located at Pangani is being auctioned.

This information came out in an advert on Monday, with Garam Investments Auctioneers saying that the building will be auctioned on September 13 in Westlands, Nairobi.

"All that parcel of land known as LR no 209/1530 Emani Business Centre along Thika Road, Pangani area registered under Farmer Industry Limited, with a plinth area of 34, 000 square feet," the advert read.

Those interested will need to produce a deposit of Sh5 million by way of cash or a banker's cheque before being allowed to bid.

"Bidders will be required to produce a bidding deposit of Ksh5 million by way of cash or bankers cheque before being allowed to bid," read the statement in part.

The seven-story building has two basement floors, a penthouse on the rooftop, a sentry house, and a powerhouse.

The structure has parking spaces, a store for water pumps, a concrete water tank, and a lobby for the elevator and stairs on the bottom floors.

Offices and conference rooms are available on each of the remaining six stories.

The building was first acquired by Jubilee Party, which was headed by President Uhuru Kenyatta just before the 2013 General Election.

The auction of the headquarters will see the end of what was once the Jubilee party’s center of operations for the 2013 and 2017 elections.

Jubilee had 24 senators and 165 members of parliament (MPs) in the 12th Parliament.

In addition, the party won 25 of the country's 47 governorship seats. However, the party was unable to repeat its success in the recently held general election for 2022.

Jubilee only secured 31 parliamentary seats in this year's election, which includes the slots for Woman Representatives.

The art just made history as the most expensive piece of American art ever sold
Entertainment
8 months ago
WATCH: For the latest videos on entertainment stories