Kamene-I got a tattoo of my current bae 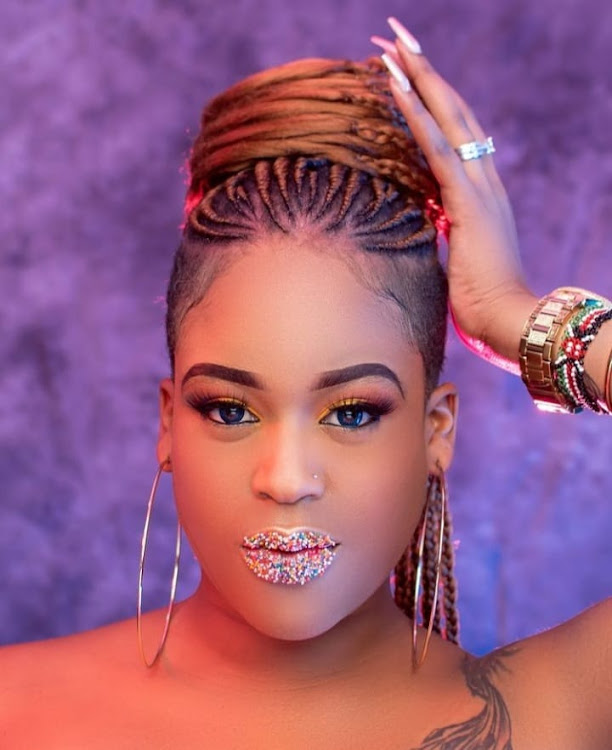 Following retired artist Noti Flow's boo getting a tattoo of her name on her fingers, Kamene and Obinna decided to dissect the act with both giving their stance on permanently marking one's body with a partner's name.

During the conversation that got a little heated, Kamene revealed that she actually has a tattoo of her current boyfriend.

She said that even if it ends, some relationships are phenomenal and the tattoo cements the memories.

Baby girl is in deep!

" So Noti Flow's...." Kamene took a break because she really did not know how to reference the two.

Obinna the animated one, yet equally confused with the relationship between the two quipped, "Yeah sijui ex, current, mara they've split then back together..."

Kamene finding her voice took the reigns of the conversation back saying, " No they're together. Yeah so ... got a tattoo of Noti Flow's name on her fingers and I was like yaaass I love it!"

But her co-host was not having it, Obinna thought that was too much drama, as Kamene pointed out " Then Noti Flow has the name of the partner on her finger as well."

Kamene on the other hand said when she saw the post she found it super cute, " I was like I am here for it all !"

Obinna however was still not for the idea "Kamene what the streets have taught is that whatever has a beginning has an end. "

"So you would not get a tattoo? Like if you found someone really amazing..." a shocked Kamene asked as Obinna cut her short.

"Not happening because when it ends the tears will be a bag full, gunia mzima. Then when ya'all break up you undress and the first thing you see is their name aahh one can get suicidal." Obinna argued.

"A tattoo? I scratch myself writing someone's name? I'd rather tattoo my kids, mom, grandma or managu (leafy greens)," Obinna said as he lamented about the character development classes he has undergone in relationships.

Kamene at that moment revealed that she actually has no problem with getting inked, "I would... imagine I totally would."

"Yes... yes I do... " Kamene said as she shyly blushed playing with her hair.

Kamene asked people if they'd tattoo their partner's names and below are some of the reactions:

@SkoozyF: yes i can get a tattoo of my partner from the head to my toes.

2OswaldorOti; Until separation knocks on the door, that is when reality of this idiocy hits you! And furthermore you can't even donate blood a better way of showing your loved ones you care!

'I'm more than happy about it,' Kamene gushes over her new man

5 things to keep in mind before saying I love you

'If one makes you happy, imagine two, or more' Obinna endorses polyamory

Obinna emphasized that polyamory has been among us for decades and it is not something new
Trending
5 months ago
WATCH: For the latest videos on entertainment stories