Aq9ine comes clean on whether he ate a spider 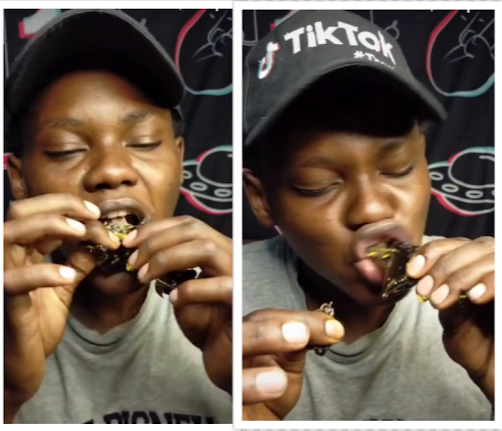 Kenyan food tiktoker Aq9ine or Bat man as people have taken to calling him just revealed that he did not eat spiders as he had the nation believe a couple of weeks ago.

A video went viral of Aq9ine where his face was terribly swollen and had orange peels, his arms were also swollen and he voiced he was not feeling well.

In the video that the content creator shared on his Instagram page he is heard saying, " Guys make your last prayers before I go, I feel like I'm going. Gosh I've eaten spiders, this is happening to my whole face. I actually feel like I have no face," as he scratched his face and breathed heavily.

But now Aq9ine has changed his tune confirming that he was actually bitten by a spider. According to the tiktoker he was anxious and tensed while making the video and that's why he said what he said.

"I told you not to believe everything you see on social media. I did not eat a spider. How can you eat a spider? Spiders have unique body parts... how can you eat such a thing?" he said in an interview with YouTuber Nicholas Kioko.

He later on added,"I was bitten by a spider on this hand. You can't imagine how I was feeling at that time. Have you ever felt like scratching your two body parts at once?"

"Every part of my body was swollen like my face. I didn't eat spiders." Emphasizing that he had not ingested the insects as he had led people to believe and it was all a misunderstanding. "I came to realise later on when I revisited the video that I had said I ate a spider."

Speaking to Mpasho.co.ke,  Aq9ine urged his fans not to believe everything they see online.

"Not everything we post online is the truth," the young man who is an engineer by profession said.

Following the drama, in a video he posted on his page Aq9ine reassured people he had fully recovered and insisted that even though he is currently taking a break he is still going to produce food content for his thousands of followers.

They might not be interested in finding a partner,but will actually agree to dress up and show up on a date.
Entertainment
5 months ago

Lady denied entry to a matatu because of her takeout food

She appeared before a Kibera court where she was charged with drinking and eating at a city restaurant under false pretenses.
Entertainment
2 months ago
WATCH: For the latest videos on entertainment stories