Kenyan fast-growing musician Miss P has come out to deny claims that she altered her skin complexion by bleaching.

During a QnA session on her Instagram page, a curious fan asked the 21-year-old singer, " ulitoa tint lini ( when did you bleach your skin?)"

To which the young musician replied, "sikuelewi (I don't understand you) if you mean bleaching I have never seen a bleaching product in my life," the musician stated.

She later went on to add, " my natural skin tone is light. Those who have met me in person know and those who know me personally know better."

Triggered by the allegations Miss P went on to add that people should learn to do background checks on people before coming up with silly rumors.

Adding that now that she had started gaining weight in the right places she would not be surprised if idle naysayers started accusing her of plastic surgery. 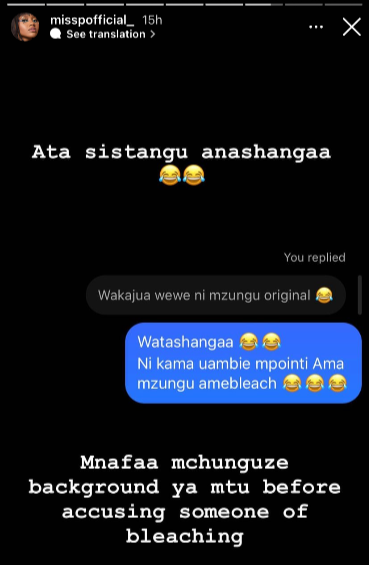 She finished off by writing, " mnanibamba Mnafaa mchunguze ( you are all entertaining me, you need to do your research ) background ya mtu before accusing someone Of bleaching."

On how much she charges for collaboration in a song, the 21-year-old was quick to reveal she does not come cheap.

A fan asked her, " collabo unacharge aje ( how much do you charge for a collabo?"

Miss P came to the limelight after she was signed by Willy Paul to his music label Saldido Records and they dropped the hit song 'Liar' together.

In what seemed like taking a swipe at Eric Omondi who has recently been seen hanging out with Miss P, Pozze warned Queen P against associating ...
Entertainment
1 year ago

Speaking exclusively to our very own Kalondu Musyimi, her hubby Bahati revealed that it will cost you a whooping Sh800,000 to book her wife Diana B ...
Entertainment
11 months ago

Huddah: Kenyan influencers do it for free to look busy!

Huddah says Africans have a long way to go because we have chosen to not promote local businesses even for a fee
Entertainment
6 months ago
WATCH: For the latest videos on entertainment stories